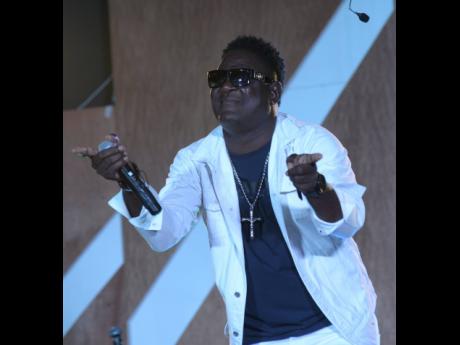 Responding to a call from the Jamaica Gospel Music Network, local artistes on Saturday night showed their philanthropic side, as they sang for free at the Bahamas Hurricane Relief Concert, held at the Fellowship Tabernacle in St Andrew. Traditional gospel, dancehall gospel, mento, ska, African beats, all melded together to create a festive mood, even as the emcee and patrons never lost sight of the seriousness of what was taking place in Dorian-ravaged Bahamas.

“Keep the faith, God is in control,” seemed to be the unannounced theme of the concert, and artiste after artistes pulled out songs designed to inspire and give hope. “Give God a round of applause,” was a constant echo during the more than three-hour long event, which saw great performance from the likes of Joan Flemmings, George Nooks, Kukudoo, Carey and Sharilyn Sayles, Shalom Katalyst, Perpetual Praise, Rondell Positive and show closer, the powerful Rhoda Isabella. As promised, Nooks delivered the appropriately titled Ride Out Your Storm, and was even more passionate with I Must Tell Jesus. He told The Gleaner, post-performance, that he is working on a full gospel album which is scheduled to be released in December. Whereas husband-and-wife duo Carey and Sharilyn Sayles connected solidly with traditional gospel favourites, Kukudoo, Shalom Catalyst and Rondell Positive entertained with a more foot-stomping kind of gospel. Kukudoo did raise an eyebrow, or two when he decided to do his signature,”Yuh neva go a obeah man from yuh born”, but it was all good.

Joan Flemmings, without a doubt, proved to be in a class by herself. Tall, imposing and dressed in full black, she is not seen on the local stage often, and this, she told The Gleaner, is owing to the fact that she is “always overseas.” With 39 years of gospel singing under her belt, Joan Flemmings showed exactly why she has endured. Her anthem, All Christian People, seemed to be a call to action – get up out of your seats and praise God. And Bam Bam, inspired by the Toots and The Maytals original, was the icing on a rich cake which was enjoyed by all. She also disclosed that her gospel album will be released in December.

Comedic duo Mr Handsome and ZanZan tailored their routine to fit the occasion, and their jokes were ‘biblical’. For example: Who was the first chauffeur? Answer: God. He drove Adam and Eve out of the Garden of Eden.

With images of the devastation inflicted by Hurricane Dorian showing on huge screens inside the auditorium-designed tabernacle, artistes were passionate in their pleas, confident that new ministries will rise out of the rubble. St Matthew, a dreadlocked gospel singer, not satisfied with performing for free, suggested that a donation should be taken up and asked for collection buckets. He led by example and dug into his pocket to be the first to give. Many others followed.

Already, the devastation has sparked the creative juices to flow, and Perpetual Praise’s Nadine Blair performed a song written in the aftermath of the hurricane and which was dedicated to the people of The Bahamas, some of whom were able to view the concert via live-streaming.

While the turnout was not as robust as desired, one patron, who is also a member of Fellowship Tabernacle, pointed out that factors, including back to school, and the short time in which the event was planned, would have affected the turnout. Also, the area is under a state of emergency, and the organisers had to request special permission from the commanding officer to stage the event beyond the designated cut-off time.

In the audience was a Bahamian couple, entrepreneurs Winston and Dahlia Pinnock, who extended their gratitude to the organisers for staging this concert. They told The Gleaner that they had visited the Bahamas right after Dorian had passed and were “overwhelmed” by the devastation. “We were travelling when the storm hit; however, our house in Freeport is located in a little area on the southside that was hardly affected. So we thank God for that. But we were able to pack stuff like airbeds, toiletries and two-burner gas stoves and send off. And we will be going back in a few days’ time,” Dahlia Pinnock stated.

Donations to the Hurricane Dorian Relief Fund can be made at NCB, account #471043885, at spurropen.com and foodforthepoor.com/bahamas.