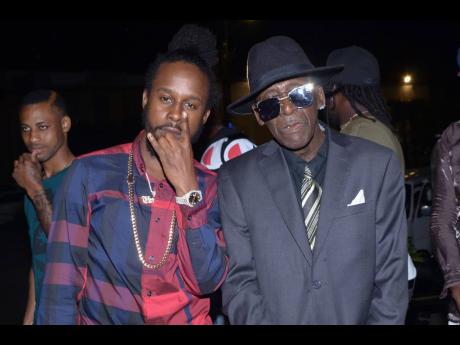 File
Recording artiste Popcaan poses for a photo op with co-star Louie ‘Teddy Bruckshut’ Rankin at the premiere of ‘The Intent 2’, held at The Courtleigh Auditorium, September 27, 2018.

The death of Jamaican dancehall artiste and actor Louie Rankin has sent shock waves and made headlines around the world. Rankin’s peers in the entertainment and film industries have since paid tribute to a “cultural icon.”

Entertainer and actor Spragga Benz, who starred alongside him in the movie Shottas, was in no mood to talk, but he told The Gleaner yesterday that he was feeling “total sorrow and mourning right now”. He had previously stated on Instagram, “Mi don’t even want to believe. S.W.A. King.”

Louie Rankin, who often referred to himself as the ‘Original Don Dada’’, had made a name for himself in the music world, and even won a Grammy award in 1992 for his popular song, Typewriter. However, it was as an actor – Teddy Bruckshut ( Shottas, 2002) and Ox ( Belly, 1998) – that the man born Leonard Ford was best known and remembered. He also appeared in the Netflix Movie The Intent Two, in which dancehall star Popcaan made his acting debut. Major news outlets, such as the Toronto News, ABC News, NY Daily News, Metro UK, Daily Mail, St Lucian News, Sun UK, the UK Standard, People.com, The Mirror, Metro.com, Heavy.com, Complex, TMZ, BET, Metro, Daily Express and Hip Hop Wired all carried reports on the car crash in Canada which claimed Louie Rankin’s life.

The Ontario Provincial Police report that the sixty-six-year-old entertainer, who was living in Canada at the time, was killed when the vehicle he was driving in collided with a transport truck near Shelburne, Ontario, around 9:15 a.m. on Monday. He was pronounced dead at the scene.

The verified Twitter account of Teddy Bruckshut on Monday evening issued a statement: “It saddens us to have to announce that The “ORGINAL DON DADA” “Trail Blazer” the legend – Louie Ox Rankin passed away this morning!”

He added, “Ur Friendship Is What I Will Miss Most. U Called Me Just Last Week Excited About Ur New Album. Telling Me To Hurry Up And Come To The Studio Cuz U Wanted Me On It. I Didn’t Make it. You Supported Me When I Was On My Face! We Made A Song Called Back From The Dead But Your Passion For Life Was Probably The Most Contagious Thing About You. You Were An Outrageous, Unapologetic, Loud, and Proud Jamaican. I’m Gonna Miss U Brother. You Were A Superstar Inna Real Life. I Hope That The Music and Film Industry Give U All The Flowers U Deserve. Truly A Pioneer.”

On Sunday, Louie Rankin announced on Instagram that he was in Toronto filming a movie and that he was working on a new album. “The Original Don DaDa On Set Shooting A Major Movie In Toronto with @bizmoihouserecords #jamaica #ReturnOfTheDonDaDa #AlbumDone,” he wrote.

Jewlz Sykes, his executive assistant and mother of three children for the actor, posted several pics of the St Thomas-born deejay and their young daughters on social media, along with the caption, “There are no words!!!!!! Sleep with the angels my King!”