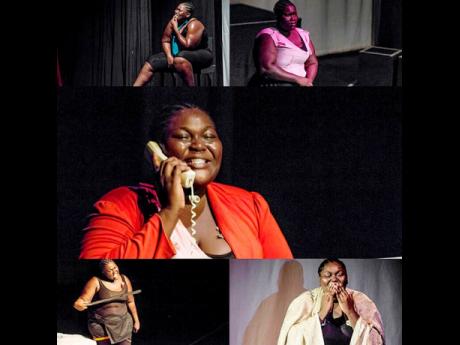 Contributed
Actress Samantha Thompson will make her directorial debut next weekend in the one-woman production, ‘Beauty & the Plus-Size Beast’.

Jamaican actress Samantha Thompson is challenging fat stereotypes in her directorial debut, Beauty & the Plus Size Beast, set to take the main stage at the Dennis Scott Theatre in Kingston next weekend. The production forms part of the biennial Rex Nettleford Arts Conference hosted by the Edna Manley College of the Visual and Performing Arts, which unfolds from October 11 to 13.

Speaking to The Gleaner about the inspiration behind the one-woman show, Thompson shared that it was actually the top production in her final year at the School of Drama in 2016, and encompasses issues still pertinent to plus-size figures in the theatre space.

“I want people to understand the world of the plus-size actress or the world of fat people in general,” she said. “People have a notion that we just nyam dung the whole place and we big and lazy. It is the belief that we can only play the helper, the ‘mix-up’ neighbour or someone elderly or sick. I am challenging all of that. The plus-size can play a child and look like a child because the body can contour to different shapes and different character dispositions.”

This is evident in the 50-minute piece. One of the characters played by Thompson is a little girl named Pumpkin, whose transition to adolescence and the issues therein are performed by the 26-year-old. Now in rehearsals, Thompson said there will be powerful takeaways for everyone, as the content is geared to all age groups.

“It is very controversial, it tackles issues like body positivity and body consciousness, holiness in apparel versus holiness in lifestyle. It also has to do with bullying, abortion, fathers, and how living in a household of women affects the personality of a little girl,” she said. “It’s about loving oneself, embracing your flaws and working with the body you have and being comfortable in the skin that you’re in, and if you don’t like it, you change it.”

The empowering themes are by no way coincidental. Thompson, who appeared in the thought-provoking play Behind the Pulpit, said she makes it her mantra to project positive messages through her characters.

“I will not take a role that will belittle my character, size, or women in general,” she said. “If my mom or church people cannot watch it, I won’t do it. I will not curse on stage or do anything derogatory unless it is proving a point or effecting change. It must be able to appeal to every age group, from the greatest to the smallest, and that is my show.”

Touting her mom and aunt as her biggest supporters, Thompson disclosed that she was raised in a Christian household and identified her calling at the age of three. While attending Melrose Primary and Junior High School, she participated in competitions hosted by the Jamaica Cultural Development Commission, which continued when she enrolled at St Jago High School. She also performed at church, studied opera performers and attended pantomimes with her mother.

“I would always sing and dance and mimic people. We used to have modelling contests in my yard, and my aunt would tell me if I want to be a model I have to be confident ‘cause models are confident. She is the one who sent me to college and my mom has always invested in me and my passion.”

Not pardoned from the criticism of others, Thompson said her confidence is enough ammunition for navigating the arena and carving her own name.

“There was a time when it bothered me, but now I ignore it because I am confident, even when people try to make me feel like an alien,” she said. “You know how Jamaicans stay. The first thing dem a go comment on is your appearance, ‘lawd yuh big eh, yuh need fi lose weight’, and they will give me remedies to solve the ‘problem’ which is not a problem for me.

“Sometimes me intelligently put dem in dem place when dem get too personal, and ask dem which food inna dem fridge dem leave and mi eat it out, or which mattress mi press out, just to provoke their thoughts,” she said.