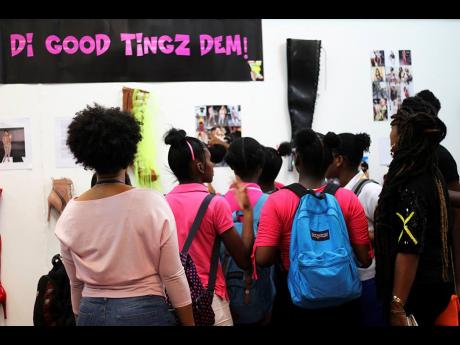 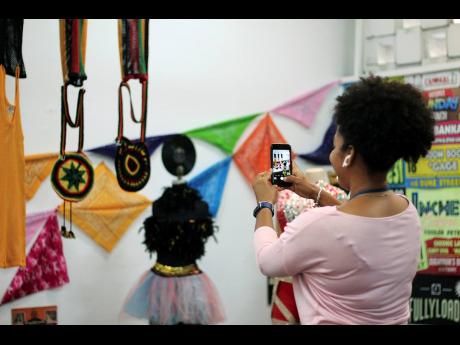 Stephanie Lyew
Sophia McKain, head of the department of dance education at the Edna Manley College snaps images of the dancehall fashion on display at 'Di Good Tingz Dem' exhibition for a keepsake. 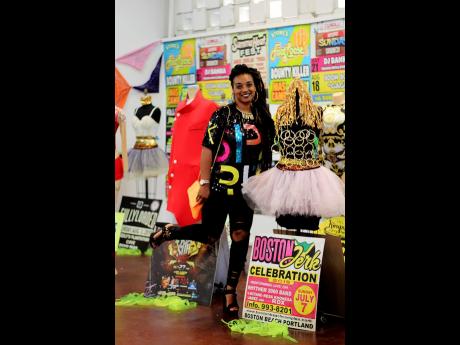 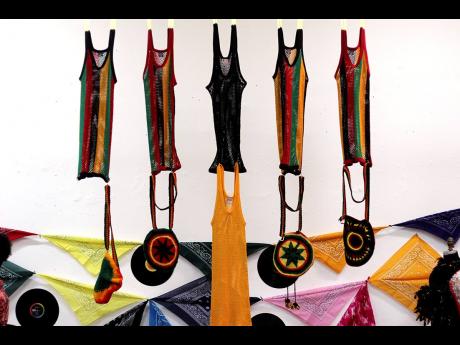 With the cosmic influence of Jamaican dancehall culture, fashion has transformed into a multidimensional lifestyle where no matter the space, one must be properly dressed in the ‘good tingz dem’. According to Maria Hitchins, lecturer in popular dance culture at the Edna Manley College of the Visual and Performing Arts, dance – dancehall, specifically – transcends the physical movement.

“It represents creativity, passion, and identity, and in relation to socio-political awareness, the products of our imagination convey that as a people, we might not have a lot financially but can generate worldwide movements out of the ideas,” Hitchins told The Sunday Gleaner.

Fitted with pieces from the personal wardrobe of noted entertainers such as Beenie Man and Dancehall Queen Carlene, as well as collages of images of personalities who have been inspired by the fashion culture, like Rihanna, the exhibition showcased the broad fashion trends and long-standing themes that have permeated Jamaica’s music history.

From the golden era of Bob Marley, who became the first third- world megastar, and other legends such as Gregory Isaacs and Shabba Ranks to the millennial generation of entertainers like Lila Ike, Protoje, Popcaan, Govana, and Sevana, there is a continuum for the dress aesthetic of reggae and dancehall across the decades. The rude-boy culture, defined by the mesh merino, was featured prominently in the exhibition.

“If we are going to talk about items like the mesh merino, it was originally designed during the World War period, when soldiers needed an undergarment that functioned to keep them warm but was also breathable, and because of our history with England, it was received into our space. Now we find many individuals, from the ordinary man to celebrities stylising it,” she said. “Before, only males used to wear it under shirts, where if it peeked out it was considered rebellious and connected to the rude-boy culture. the same fabric is used to make high-end designs, handbag, and is produced for the commercial tourist market.”

Other items of clothing, like the bandana or handkerchief and the 194-year-old Clarks brand of shoes, which was adopted into the island’s rude-boy culture, exposed the hitherto untold history of their introduction into local culture. The handkerchief, which is often tied around the head, arms, and legs, was an adaptation of the cowboy or country and western image that, during the time of artistes like Josey Wales and Lone Ranger, was an essential part of the image.

It was not the dancehall lecturer’s first time designing an exhibition from the perspective of Jamaica’s fashion sense, having presented a similar project at the Art Basel in Miami’s art district, Wynwood, in December of last year. That included pieces from Sean Paul’s Gimme The Light music video; Capleton’s dynamic hand-made wardrobe, from clothes to shoes; a dress that belonged to the ‘Queen of Reggae’, Marcia Griffiths, and pieces donated by Japan’s Junko, the first non-Jamaican to be crowned Dancehall Queen in Jamaica.

She noted, “The global reach of the iconic shades of red, green, and gold beyond the local Rastafarian community, as well as the inventiveness and expressiveness of our dancehall queens, who are classically vibrant with ‘bling bling’, tulle skirts, fully sequinned outfits, and traffic-blocking colours from head, with wigs, to toe, with their shoes, has surpassed the streets and can be seen on international stages inspiring hip hop, pop and rap cultures, and luxury runways.”