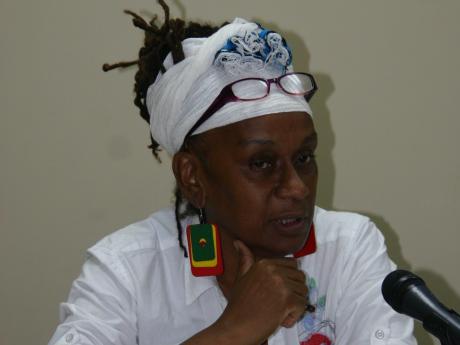 Entertainment executive, Maxine Stowe, the manager of the only living Wailer, Bunny Wailer, is not comfortable with the fact that Kanye West is being allowed to stage his pop up Sunday Service in Jamaica on Heroes Weekend, which is traditionally chockfull of cultural activities, which include the celebrations for Peter Tosh.

Tosh, a former Wailer, would have turned 75 on Saturday and events in his honour kickstarted on Thursday and continue for the weekend.

“This Sunday Service changes the dynamics of the weekend,” she said, adding that West is now the “hero” for the weekend.

She added, “And for what? What is the country getting out of this event from a man who declared that slavery is a choice? For you to bring him to Emancipation Park is bad thinking. This is a big cultural confusion.”

She also noted that with West’s celebrity status, his event is way too big to be ever considered a “pop-up”.

Stowe, known for her firebrand energy, charged that Kanye West coming to Jamaica is nothing more than a stunt.

“This guy is doing it for a stunt for his album, which is due to be released on October 25. I don’t want to be a stunt. It’s a Sunday Service and he’s holding it on a Friday. What is more insulting is that he is doing it with the blessing of the Ministry of Culture, which is supposed to be our intellectual property guardian. What agreement did Kanye sign? Are there any restrictions to how he can use this footage that he is coming into our island to get?”

A release from the Ministry of Culture, Gender, Entertainment and Sport stated that while it is facilitating the staging of the event in collaboration with other government entities, West’s Sunday Service at Emancipation Park “is not a ministry/Government of Jamaica production.”

It further states that: “The producers, who own the rights, have stipulated the following: Coverage – Restricted; Still photography and recording of video (of five-minute clips) is allowed for news bulletins only; media houses are not permitted to broadcast or stream event; producers will stream live at www.sundayservice.com."

A spokesperson in the release added that Kanye West will not be available for interviews.

Director of Public Relations and Corporate Communications at the Ministry, Oliver Watt, when asked if it imposed any restrictions on West regarding filming in Jamaica, he said, “Like any other promoter, there are no restrictions imposed on him.”