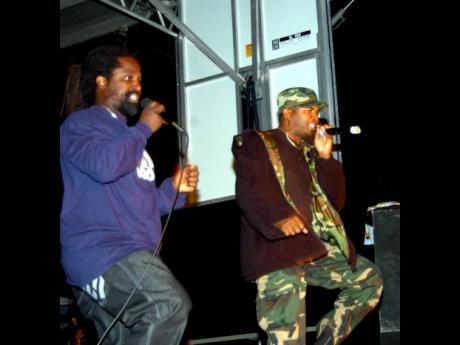 When Tivoli Gardens High School Track Corporation celebrates the school’s 50th anniversary with a banquet honouring the 50 most outstanding alumni, numbered among that select group will be ’80s deejay Papa Michigan.

A student of the institution between 1977 and 1979, Anthony Fairclough, as he was known then, excelled in football and, of course, deejaying, representing the school at the Manning Cup level. “I was a very good ‘baller’ and we reached the finals twice,” Papa Michigan told The Gleaner. And he was very quick to point out that he also excelled academically.

“I attended two schools at the same time,” he said with a chuckle. “I used to go to Kingston Senior School on the morning shift and attend Tivoli on the evening shift because I wanted to do additional ‘O’ level subjects,” he explained.

Well, whatever his rationale back then, it paid off well for the sportsman-artiste, who will be recognised on October 26 at the function to be held at the Adria Hotel in Queens, New York, USA.

Four decades after he shot to prominence, the veteran dancehall artiste, who gained fame as one half of the supertalented duo Michigan and Smiley, has remained focused, committed, and concerned. The Gleaner caught up with the Nice Up The Dance toaster at a recent Jamaica Association of Professional DJs, Promoters & Sound System Owners (JAPPS) meeting to discuss the Noise Abatement Act and the way forward following a clampdown on sessions by the police and subsequent distress signals from promoters.

“I had to be here to put in my one-cent worth,” he said. “This is important as it affects all of us, whether or not we are selectors, sound system ­owners, or ­promoters. We are all a part of the music industry, and we need to unite and make our voices heard,” declared the artiste, whose Rub a Dub Style, Nice up the Dance, and Diseases had an impact on dancehall in the late ‘70 and ’80s, copping Song of the Year titles.

Papa Michigan and General Smiley are logged in Jamaica’s music history as one of the first dancehall duos on the scene. Michigan recalled that when his song Rub A Dub Style was released in 1978, he was still a student at Tivoli Gardens High, and he insists that he handled being double-dipped in stardom quite well.

“Playing on the Manning Cup team and being a deejay with big songs while at school was a big thing, so, of course, there was special treatment. But I didn’t get hype or anything like that. I knew it was a gift,” he said, pointing out that on the contrary, there was no star treatment at home. Papa Michigan’s father was a justice of the peace who later became a pastor, so deejaying was not expected of his son.

“I remember singing slackness one night at an event and the whole Union Gardens community come down on me,” he recalled. After that, he figured it out. “With my level of education, I knew that I could make better songs. I had studied English literature and I was a good biology student as well, and that’s how I was able to write Diseases,” he said. Not only did he write hit songs for himself and Smiley, he also wrote for other artistes, including General Echo. “I was General Echo’s teacher,” he said.

With his career path on an upward trajectory, Michigan started to travel overseas, but he did not get an opportunity to reap the real successes of his career, because in the midst of the high, Smiley migrated and producers were reluctant to record him as a solo artiste.

In the 1980s, Michigan’s house was robbed and the gunslingers shot his father and gun-butted his mother. This forced his migration to New York, where he linked with producer Whitfield ‘Witty’ Henry, who now hosts Uptown Mondays, and “made some good music. Still on the music-making path, Papa Michigan, who has built up a huge fan base in South America, recently released the single, Put Your Loving On Me, on his own Rashinco Music label.