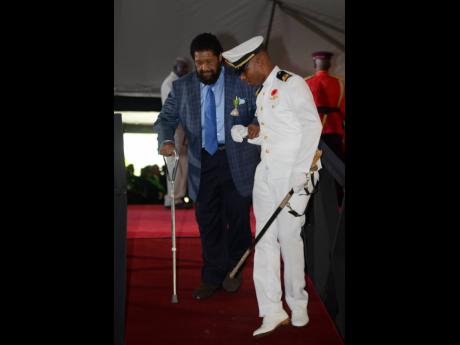 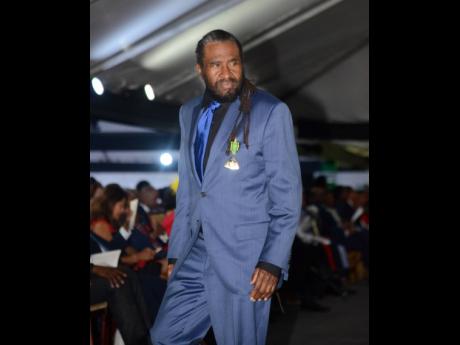 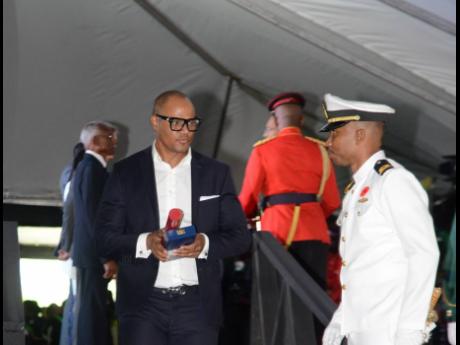 Kenyon Hemans
Taki Miller collects the OD awarded posthumously to his father Jacob Miller for his contribution to reggae music with the Inner Circle Band.
1
2
3

“We flew 17 hours to be present to collect our award – from Chile to Miami to Jamaica straight to King’s House, where we got properly dressed in the medical tent,” said Roger Lewis, one of the founding members of Inner Circle Band.

For over 50 years of contribution to reggae music, members of Inner Circle Band, brothers Ian and Roger Lewis, as well as the deceased Jacob Miller, were conferred the Order of Distinction in the rank of officer at yesterday’s Ceremony of Investiture and Presentation of the National Honours and Awards 2019.

However, significant to the reggae musicians who formed their band 51 years ago, Roger Lewis said, “There was one element I think that should have been added to the purpose of the award, and that is our ambassadorial work to educating people on what reggae is in our travels and through our music, not just the contribution to the genre. Still, this is big.”

Taki Miller, who accepted the award on behalf of his father, who close to 40 years ago was killed in a motor vehicle accident, told The Gleaner that although his own memories of his father are few, having been only five years old when he died, they are cherished.

“I remember my father as having a big personality and from what I have been told, there are no bad memories of him. He catered to whatever market, no matter what side of the fence, and that is what I want our nation to be reminded of when they hear the name Jacob Miller years down the line,” Miller said.

He added: “Reggae music as a whole is part of a bigger picture and it is good to know my father and other members of the music industry are being recognised for their contributions to a genre that still exists and is being adapted worldwide.

I am grateful to the persons who nominated Inner Circle Band and my father for this national honour.”

The young Miller also highlighted the invaluable work of his father’s former band mates, the Lewis brothers, for the continued support and promotion of the music which keeps the name Jacob Miller on the lips of reggae lovers worldwide.

He said: “I have often joked that it is time for them to take a step back and just enjoy their returns from the music; they managed to be here to collect the award (walking stick and all) and make the same effort to be all across the world.”

For Ian Lewis, the feeling was nostalgic.

“In the band’s earlier years, we played at a Governor’s Ball right inside King’s House. Our return to the grounds is not just rewarding but has deep meaning to see that we received an award from our peers and the country,” he said.

Inner Circle Band, also known as the Bad Boys of Reggae, were known for playing a mixture of reggae, pop and soul in the nightclub and hotel circuit throughout Kingston, and they released their first album Dread Reggae Hits in 1973 on the Top Ranking label owned by Lewis. The band gained further exposure after playing as a hotel house band in the 1978 film Rockers and have not stopped touring since. Approximately 16 years later, the band received a Grammy award for the US reissue of the Bad to the Bone album, titled Bad Boys, which featured two of their most popular tracks Sweat (Oh la la long) and Bad Boys, which serves as the official theme song of the Bad Boys movie franchise.

Lewis says that there is no stopping for Inner Circle Band any time soon; the award only adds fuel to the engine that already exists.

“We are able to enjoy the fruits of labour every day. For me, I am seeing my own children – my fruits – take form; one of whom is Lunch Money Lewis, who has the 2015 hit titled Bills, and the other son doing well in social media. Still we must represent for the music,” he said.

On a more emotional note, he continued, “Jakes,” as he affectionately refers to his deceased band mate, “was a natural. Call him the Jamaican Elvis Presley, a man of spontaneity that even at the time of his death was observed as someone who could have done great things. When we got the Grammy Award without him, we cried because he should have been there but he never got the chance to go into the car and drive it to the finish line. We are going to complete the narrative.”

Others in the entertainment industry who received awards yesterday were Rita Marley (Order of Jamaica), Sean Paul, Gussie Clarke and Herbie Miller, who were awarded the Order of Distinction (Commander class); and Glen ‘Titus’ Campbell, Desi Jones and Patrick Roberts (Order of Distinction – Officer class).