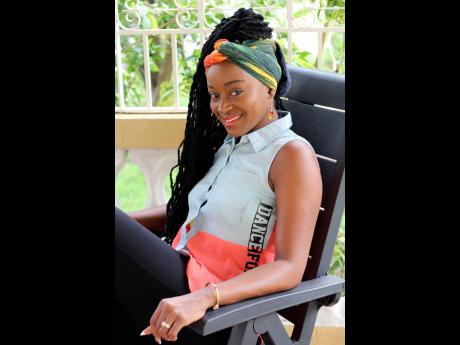 She speaks one language – dance. If ever an opportunity arises to start a conversation with the owner and artistic director of the Dance Forever Contemporary Theatre Company, Michelle Allison Pilgrim, don’t let it pass. The Trinidadian is on an ­expedition to reach the ­pinnacle of dance education, and it just so happens that Jamaica is her present stop, where she is studying the L’Antech, a modern contemporary Caribbean dance technique, with its creator Dr L’Antoinette Stines.

“As technical dancers, we are exposed to ballet and Horton’s Technique, etc., which is how we are trained. So to learn that someone from the Caribbean dared to use those foundations to create their own technique, I find that is amazing,” Pilgrim told The Gleaner.

She added: “We have a habit of ­praising people after they are gone, and we hear names like Dr Stines and their influence ever so often. I believe she should be lifted while she can enjoy the fruits of her labour.”

Pilgrim danced with Eric Butler, one of Trinidad’s foremost creative icons, in her early childhood years until the age of 16 then started her own company three years later. Coming from a family of teachers, she said dancing was not exactly the career path she was expected to take. However, her mother had envisaged that the art form would play some role in her daughter’s life story and made certain she knew all the routes to take.

In this dancer’s compelling odyssey, she has explored the traditional moves of Trinidad, like the bélè and contemporary, hip hop and Indian dance. Now in her 30s, she is engrossed in the classes at L’Acadco: A United Caribbean Dance Force, writing a new chapter of her quest.

She said: “I want my dancers to know about Dr Stines, and getting one-on-one classes is a blessing – to be able to document everything and have it well-written so when I am passing on the information to my children that they know the origin.”

Her first interaction with the L’Acadco head was during a workshop at the Edna Manley School of Dance in 2014, an opportunity she received during her studies at The University of the West Indies, (UWI) St Augustine campus. Their second meeting was in Barbados. Pilgrim says she became absorbed in Dr Stines’ methods – ­keeping in tune with L’Acadco’s productions until she was able to make the trip to see one-up close.

“She did not believe I flew to Jamaica for the sole purpose of attending the show. I believe it was ‘L’Antoinette’s Dream in 2016 where I met some of the company’s ­dancers, some of whom have maintained close ties, like Jessica Shaw, Amanyea Stines, and Oraine Frater.”

And the next year, the same three ­dancers, along with Dr Stines, journeyed to Trinidad to ‘skank sweetly’ to Chronixx’s 2017 hit single with Pilgrim’s company for a production.

“From there, we hit it off. It was heartbreaking when I could not make it for ‘Dancing Crystals’ last year, but I had to sacrifice to save for this. When I saw L’Acadco at Carifesta back home in August, I did not even inform them of my plans to travel to Jamaica in October,” she said.

It has been three weeks of non-stop sessions, separated from her own students in Trinidad. “They are very much aware and even idolise these dancers, especially Jessica … . Seeing my children look up to dancers that are not from Trinidad makes me acknowledge the influence, and how no matter the difference, we are ­connected,” she said.

Call it her pilgrimage. Yet, this isn’t completely new territory for Pilgrim – these trips to learn and perform dance. She has toured across America as a cast member with the UniverSoul Circus, where she led the Caribbean segment of the show’s routine. It was after her seven-year stint that she returned to her twin-island home and decided to acquire her degree in dance education.

She shared: “Growing up, a dancer that learns technique will probably ­encounter challenges that have nothing to do with having formal education. With the ­circus, no one was interested to see me do a demi-plié; it was all about the limbo, which is a popular dance in Trinidad. I ­literally went from being a contemporary dancer to a limbo dancer and showgirl. It made me realise though that in addition to ­technique, I must also know my local, as well as regional, culture,” she said.

She names Cuba as the next Caribbean destination on her bucket list to study dance.

“What I am doing is being culturally responsible. UWI first introduced me to Caribbean dance culture and the merging of such, and because I am influential in the area of children, from babies to teenagers, it motivates me to continue what I do and pass on the knowledge. That is what I am trying to do with this journey,” she concluded.