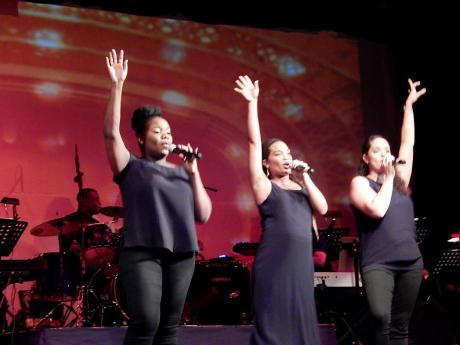 Photo by Michael Reckord
This trio (Trevelle Clarke-Whyne, Ana Strachan, and Ruth Browne) sings a song from a musical, at the Edna Manley School of Music concert on Sunday, November 2, 2019.

The lights of New York City’s most famous street shone in Kingston for a couple of hours last weekend. They illuminated the Vera Moody Concert Hall at the Edna Manley College’s School of Music on Saturday and Sunday evenings, enabling audiences to have a supremely delightful Broadway theatre experience.

For a tiny fraction of the air fare to the Big Apple, not to ­mention the cost of admission to the ­productions, showbiz aficionados revelled in songs from eight Broadway musicals sung by seven of the island’s best vocalists. All faculty members of the school, the singers were André Adman, Ruth Browne, Trevelle Clarke-Whyne, June Lawson, Carl Lee Scharschmidt, Ana Strachan, and the show’s director, Michael Sean Harris.

Exhibiting energy and carefully choreographed showmanship that had the audience applauding and cheering every number, they sang 14 songs from very diverse productions. The first was Into the Woods, a clever amalgamation of some beloved Brothers Grimm fairy tales, Cinderella, Little Red Riding Hood, Jack and the Beanstalk, and Rapunzel. The original story that ties the tales together involves a baker and his wife who have difficulty beginning a family because of a curse put on them by an evil witch.

The record-breaking A Chorus Line! is a celebration of the unsung heroes of musical theatre, the chorus dancers – valiant, dedicated, underpaid, and highly trained troopers “who back up the star and often make them look more talented than they are”.

We next heard songs from Once on this Island. Inspired by Hans Christian Anderson’s The Little Mermaid, it’s about Ti Moune, a peasant girl who falls in love with a wealthy boy from the other side of the island. When their divided cultures keep them apart, Ti Moune is assured that she would be provided with everything she needs on her remarkable quest to reunite with the young man who had ­captured her heart.

Company is about a man who is both terrified of marriage and terrified of being alone. Kiss of the Spider Woman, which won the 1993 Tony award for Best Musical, is a testament to friendship in dire circumstances. It is set in a prison in Argentina in the 1960s when the country was in social turmoil.

Hamilton: An American Musical is about the life of the all-but-forgotten American Founding Father, Alexander Hamilton. In the song Wait For It, sung by Scharschmidt, Aaron Burr (who would later become the third vice president of the USA) reflects on Hamilton’s swift rise and his own slower one. The second song, the vitriolic You’ll Be Back, sung by Harris, shows King George sending ­sarcastic “love notes” to the colonialists in America who are defying his authority.

Wicked tells the story of two unlikely friends, who happen to be witches, in the land of Oz. After a tumultuous journey, we hear in the poignant song For Good that Elphaba (Harris) and Galinda (Browne) have finally learnt ­forgiveness, just as they prepare to separate. The Greatest Showman is a musical film inspired by the story of P.T. Barnum’s creation of the renowned Barnum and Bailey Circus.

Though the show was originally timetabled for two days, Harris (who teamed up with Browne to mount the production) told me that the cast members are all up for a rerun. “We are discussing either going somewhere to do the show or doing a show, or some shows, for schools, with a short workshop component,” he said.

Speaking of the production ­process, including seven weeks of “fun” vocal rehearsals, Harris said “the challenges were in the arrangement, effective delivery and staging, and just musically. Some songs had several changes of time signature and tempo.

“We had to adjust the ­arrangements and scoring for the instrumentation we had available. The bulk of the arranging was done by Gerd Beyens, with the remainder by Orville Hammond.”

He designed, created, or sourced images and videos for the projections the audience saw during some numbers. They were to “either act as set or backdrop or illustrate the mood, situation, or theme of the numbers”.

One of the choreographers, Michael Holgate, tutor ­coordinator, Philip Sherlock Centre for the Creative Arts (PSCCA), Mona, while agreeing that the show should be remounted, said that the PSCCA was booked solid for the rest of this year, so it was not a possible venue.

He added: “Maybe later on in the year some of these same numbers can be complemented by other groups [from the University Singers, the University Dance Society or School of Dance] in a musical feast at the PSCCA … if anyone drops out next year.”