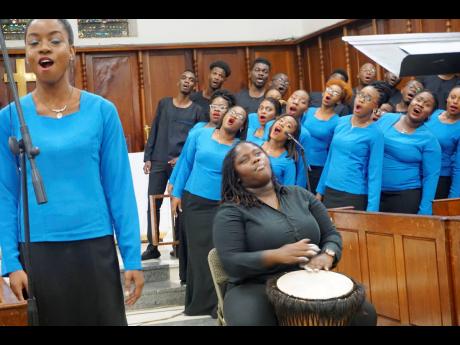 For the past four years, the University Chorale has developed a “blossoming relationship” with the Jamaica Autism Support Association (JASA). JASA is a support group for parents whose children are diagnosed with autism. The relationship that started in 2015 saw funds from the chorale’s annual fundraising concerts, in April and the more recent November chapel show, donating approximately $600,000 to the association.

“The money helped us to do a lot of things that we wouldn’t be able to do. It supports the activities and the awareness events for the organisation,” Kathy Chang, president of JASA, told The Gleaner.

Chang, who is also the parent of an autistic child, detailed that the activities include workshops and fun events for the families: “Autism affects the whole family – the siblings, the parents are all drained and strained. So we have fun events for the family, where parents can come together and just enjoy themselves in an environment where they don’t feel they are judged … getting support from each other.”

Chang was one of many who enjoyed Sunday’s fourth staging of the November concert held at the University Chapel, Mona. Titled ‘Eclectic Roots Fall Chapel Concert’, songs were done a cappella, as well as instrumentally supported. The eclectic selections included classical songs from Europe, Africa and Jamaica. Some, such as the uptempo Dies Irae by W.A. Mozart, were sang in their original arrangement. But for others, the creative group, led by musical director Shawn Wright, stamped their musical creativity with resounding success.

The two-part programme began with the choir entering from audience centre, singing O’Neil Jones’ Sing to the Lord a New Song. They continued to stir hearts with the slave lament Steal Away, arranged by Shawn Wright and sang by soloist Krista Fuller; a head-bopping rendition of the Stacy V. Gibbs-arranged Rockin Jerusalem; and Resheda Campbell’s rendition of Fantasia’s I Believe.

In the second half, the multi-faculty group not only continued to dazzle with their creative use of the chapel’s space but, with a change of costumes, they took their presentations up a notch. Shane Wright did great justice to Kathy Brown’s arrangement of Endless Night – from the Lion King on Broadway – and Rhythm of Pridelands. However, Regina Campbell’s show of vocal strength with the Mark Brymer-arranged Never Enough had the audience on their feet.

Also on the eclectic list of musical delights was an emotive rendition of Discipline Child, arranged by D. Case. The curtains came down on another Brown-arranged song, Are You Going Home.

Interestingly, there was a written message from the late founder and musical genius, Noel Dexter.

“He wrote it before he died, so we just kept it,” the chorale’s musical director told The Gleaner. Another tribute to the late choral music consultant was a fine rendition of Revival Suite, which was arranged by Dexter himself.

In 2020, the University Chorale will move to the Philip Sherlock Centre for the Creative Arts for their April concert season.