CH4SE gets ‘Closer’ to his dream - Name, style altered to match vision of artiste’s brand 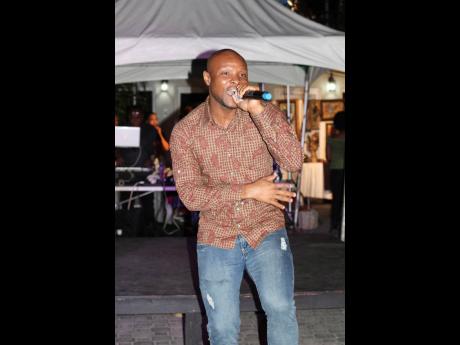 From being one of dancehall artiste Aidonia’s protégés to running the recording race solo, Geddys Ferguson is on track to win the hearts of fusion music lovers. He does not look a day older than when he first recorded with the 4th Genna frontman in 2008. At that time, the recording artiste identified as Stratdon. Pointing out that he has aged well, the artiste’s growth has included the reshaping of his performance style and a name change; now he goes by the moniker CH4SE (pronounced simply as ‘Chase’).

He does not boast any special musical upbringing, but says whether or not he thought about taking a step in a professional direction, “simply singing a tune was something that brought peace to me”.

The versatile artiste, who can switch from the fast-paced, bassy tones of dancehall to slowing it down to sweet and flirtatious harmonies, continues to chase the dream. He said: “Back then, it was not until I met Aidonia and he gave me the opportunity to voice on a song in studio (I believe it was 4 De Girls) that I took my music career serious, but that was more on the dancehall axis, and more edgy than I want for my sound now.”

He added: “More than anything, it has been about getting the music out in my own way, stop overthinking things and picking up the pace. Revamping and refocusing my career, along with the name change, has worked towards the goal, based on the reception I have received so far.”

A great deal of the artiste’s music is influenced by the R&B genre but, he explained, “I live on the rock of reggae and dancehall so though a lot of my style is enkindled by that melodious sound of R&B music or pop, reggae and dancehall plays an intrinsic part in the way the lyrics are delivered, especially in my most recent single produced by Dale Virgo, called Closer.”

He says the new track was at the outset written and recorded on a pop rhythm, but after considering his target market, he redid it on a reggae beat.

CH4SE said: “It is more relatable to who I am and where I am from. I love how it turned out because I think Brand Jamaica is a big thing across the world; people are receptive to the style and feel of it, so it is doing what it is supposed to.”

What is that? The song which speaks to “being in pursuit of her – that one girl you want,” he said, “tells a story but listeners have the freedom to flip it any way they want to.”

And he claims this “her” is no one in particular, even though it is not the singer’s first time penning a song to court a member of the fairer sex.

He said: “It is unreleased, a song called Something About You that I wrote for a girl I admired but it didn’t work in courting her. She was like, ‘OK’ and it taught me, it is not just about how you sound as a singer, no matter how great, a person may not flow on the same frequency as you.”

Still he affirmed, “Musical courtship is something because it connects people, sometimes it tells a story and it conveys a certain message that we can’t communicate off the top of our heads … there exists songs that can say exactly what we want to say. Not to mention music gets a lot of people through things, it’s that centre point for a lot of people; if I am a little down, it brings me to a place of concentration.”

With the contribution of directors Paul McKoy and Michael ‘Faraji’ Bryan, the singer is working to get the music video out for Closer in short time. The scenes, which were shot in New York’s Central Park, subway stations and the boroughs of its Meatpacking District in Manhattan, should connect the dots of the story behind the single.

“It captures the whole energy I am going for and still has that edge to it that people can groove to. Overall, it is just a good blend of melodies and visuals, with more to come,” he said