Finally, the terminator is back 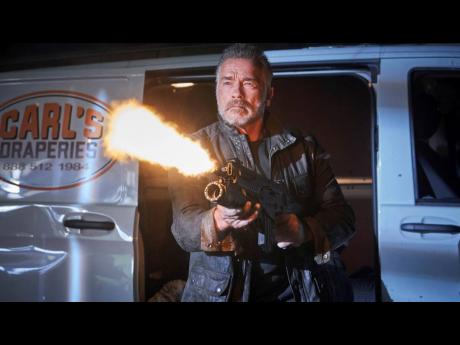 AP
Arnold Schwarzenegger in a scene from ‘Terminator: Dark Fate’.

It should come as no ­surprise that there is another Terminator film among us. Despite the last iteration being surmised as a failure by both ­critics and audiences, it was nevertheless saved by an enthusiastic international market that can’t get enough of the homicidal artificial intelligence with a thick Austrian accent. Almost 40 years ago, Arnold said he’d be back, and he wasn’t lying.

Unlike the previous times, this was a return I was immensely satisfied with. It takes the series in a new direction that’s refreshing, given that the one it was in had grown rusty. Terminator: Dark Fate is like a shiny new toy with flashing lights and whistles, with new features to keep you interested for the entirety of the runtime.

The movie is just over two hours long and in that time, you’re shown the new saviour of humanity, Dani, played by Natalia Reyes, being hunted down by Gabriel Luna as the Rev-9 Terminator, a hybrid between Arnold’s T-800, and Robert Patrick’s T-1000. There’s also the cybernetically enhanced Mackenzie Davis as Grace, Dani’s protector, and the Terminator-hunting veteran, Sarah Connor. Each character has its own concept, but it never feels gimmicky. Each of them represent something in the story, and adds to the conflict of this survival tale.

The action is engaging, thrilling, at times a little overly ambitious, and the effects range from impressive to serviceable. It’s fun as far as blockbusters go, but it’s nothing that’s hard to come by with ­modern action films. What really sticks with you after it’s ­finished is what it’s trying to say. The movie is very intentional about its ­message about US immigration. At one point, Dani’s escape from the Terminator brings her to the US-Mexican border, where the authorities feel just as threatening as the invincible killing machine that’s programmed to take her out.

The movie is especially good at presenting three well-thought-out female protagonists without feeling as though it was done out of pressure to present a strong female character. It’s a subtle and more potent representation that’s missing from most franchises, which seem to be doing it because they’re forced to, rather than because they want to.

I never expected to love Terminator: Dark Fate. I came away from it thinking it was a love letter to the best of the series, and a statement on what blockbusters can do in 2019.