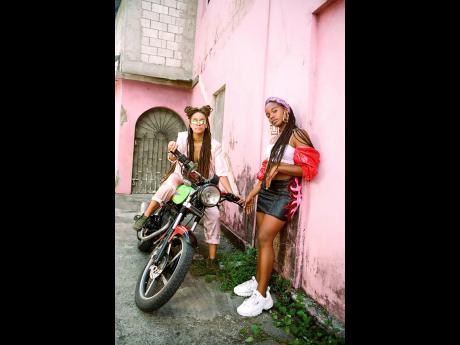 “As an artiste in Jamaica, you just haffi know how to jump on a riddim,” says reggae singer Kelissa. Clearly fascinated by the sound-system culture, which foundation artistes hail as a great institution of learning, the young artiste has produced a body of work that has captured the vibe and excitement inherent in all things ‘sound’.

“It is important to tap into the free flow as an artiste and capture that side in a way that an album produced in a studio can’t do,” Kelissa told The Gleaner.

She describes her first mixtape, titled Anbessa World, as a merging of two worlds in the form of music. “My journey has been a combination of Africa and Jamaica. I had the opportunity to travel because my family, who follows the Rastafari principles, moved to East Africa when I was 15, and then I went to Ethiopia for seven years,” she explains of the sojourn that has resulted in Anbessa World, a place where “our alikeness and integration is more important than our differences and separateness”.

“Anbessa, which means lion in the Ethiopian language, Amharic, is symbolic of the fierce and fearless energy that is waiting to express just how powerful we really are,” she says. Emboldened and unrestrained, Kelissa explores a world without musical walls as she jumps on ‘riddims’ and toasts like a pro on this collaborative project with disc jockey-selector Shacia Payne (who doesn’t use her Marley name in her moniker).

The mixtape has been two years in the making, during which time Kelissa brought forth new life in the form of her daughter. “It’s one of the most beautiful journeys. It’s the ultimate miracle, and it will be interesting to see how this will impact my body of work,” she said.

“It’s free for download,” Kelissa said, elaborating that most of the music isn’t hers and that the compilation has allowed her to incorporate samples and covers without limitation. “There are no borders for those who want to receive it,” she said.

The EP is a balanced mix, which cruises for spells and then, unexpectedly, edges jut out from left field. The opening line, by Meeka Nyota, is instructive, to say the least, and possesses a rawness that could actually catch the average listener off guard. Essentially, it’s a declaration for women to “skin out yuh mind” rather than the nether regions of a female’s anatomy. But in this case, the early shock value works, and in a mixtape that is 47 minutes long, the open-your-ears-and-listen lyrics are as integral as the flow.

The music video sees Kelissa on a road trip across Jamaica, with the only visuals being the actual road and the interplay between the landscape and the events outside of the vehicle.

“I personally enjoy listening to music in a car, so it was creating that kind of vibe,” Kelissa says.

Hot on the heels of the release, Kelissa and Shacia Payne will host a sound-system session at Skyline Levels in St Andrew. It will be the first time that the two will be performing together, and Kelissa is high with anticipation.

“I tend to be a serious person and sometimes overthink things, and Shacia is flexible, fun, and she just have a vibes,” Kelissa said of Stephen Marley’s daughter.

She added: “Shacia is very much about the music. When I first saw her, she was deejaying and mixing, and then she just gets up and dance. We connected in the studio, and I got the idea to ask her to collaborate with me on this project. It was a joy being able to collaborate with her.”

The Anbessa World Sound System session is scheduled for December 7.