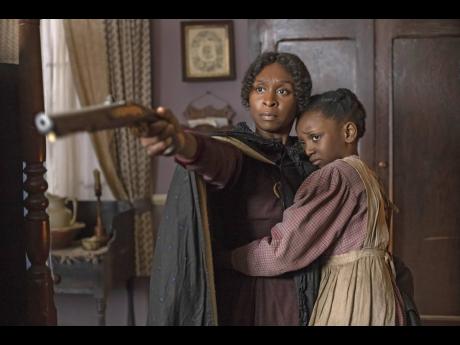 Contributed
Cynthia Erivo as Harriet Tubman and Aria Brooks as Anger at age eight in ‘Harriet’.

Making a movie about Harriet Tubman is a near-impossible task. A quick perusal of her Wikipedia page tells you she was a woman whose only ­obstacle to continuing her heroism was death itself. Not to mention the severe consequences if you get her movie wrong. Harriet Tubman is a woman of colour who came incredibly close to becoming a new face on United States currency. You don’t give a person like that a half-price movie

Such pressure is probably the cause of Harriet’s biggest problems. The movie knows it has a lot of history to tackle and ends up feeling overstuffed. The movie also wants to make that history resonate with as wide an audience as possible, so it comes off as simplistic. In a lesser movie, these issues would be enough to render the film unwatchable, but Harriet makes its way through with the help of its cinematography, its strong emotional moments, and its performances.

Cynthia Erivo plays Harriet Tubman and takes on the role with both hands and never lets go. She’s vulnerable, fierce, empathetic, and ­ruthless. As multifaceted as it is, the beauty of it is that it never feels like a ­performance. Many of the moments in Harriet feel contrived to move the plot along, breaking the film’s illusion and feeling rote. Erivo is what keeps the viewer locked in as she becomes the storied hero with fervent authenticity.

Harriet will no doubt be a film optioned for educating young history students, and rightly so. It’s like a jumping-off point for the wider and expanded tales of the legendary Harriet Tubman. You don’t get her whole story, but you leave thinking you weren’t supposed to. It uses the legend to its advantage and establishes Harriet as an inspirational hero. Formulaic? Yes. Impactful? Undoubtedly.