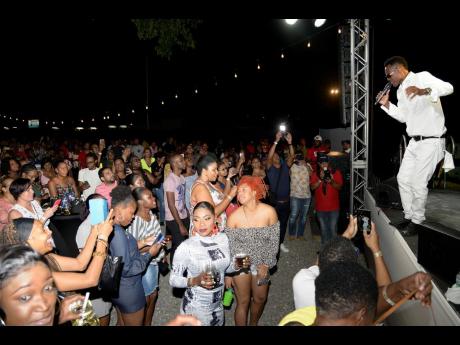 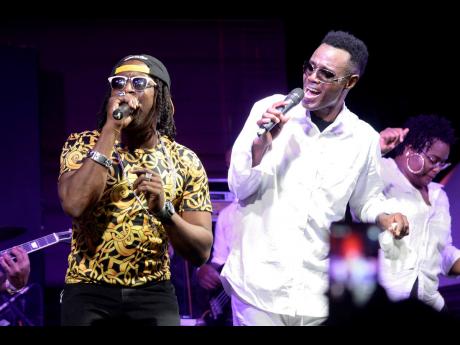 Expertly accompanied by a band that was strong and kicking, as well as two super-energetic female backing vocalists, reggae singer Wayne Wonder indelibly placed his signature on the open-air venue, Peppa Thyme Restaurant, on Thursday.

It was an interesting mix of the young and the young at heart who turned out to sing and dance with the artiste whose very attire made it clear that this was going to be a master mixology class, and not some tipsy, schoolboy performance. When he claimed the stage at 10:08 p.m., it signalled the start of a spirits-raising performance that had nowhere to go but up. Waynie, as he is affectionately called, ran through the gamut of his repertoire, drawing for old school, lovers rock, brand new cereal, R&B and, of course, the legendary dancehall-fused collabs that proved to be stinging crowd-pleasers.

Naturally, bangers such as Searching, Joyride, Love And Affection, Saddest Day, Bounce Along, I Still Believe and Bashment Girl were placed in the mix and got their fair share of ‘forwards’, but it was I Don’t Know Why, the massive 1992 collab with his friend Buju Banton on Penthouse Records’ Movie Star ‘riddim’ that tun ova Peppa Thyme. A pull-up wasn’t just necessary, it was vital.

Wayne certainly did not disappoint his fans when he selected songs from this musically rich period in his career, and with the absence of his collaborator, he slickly imitated Buju’s style and pattern. Brap! Brap! But Wayne was also very much his own artiste and when his smooth vocals belted out his 2003 international hit, No Letting Go, it was a reminder of exactly why this reggae singer is still in high demand. He told his fans that he was headed to the UK and then to Scotland for shows this weekend.

Stating that he loved the energy, he called on deejay Frisco Kid, and the camaraderie between the two was a teaching moment. The Stink riddim was their choice and Wayne’s words were, “You know which Fricso a my favourite?” before launching into Doggy Style, a back-in-the-day collab with the two artistes which brought back memories for those old enough to recall, and created new ones for the rookies. Brian ‘Ribbi’ Chung, the popular club owner who has probably staged more shows than patrons inside Peppa Thyme times two, was in his element. Not only was he singing word-for-word, he stepped up to salute Frisco.

And Frisco Kid was jubilant. “A Waynie draw mi out,” he told The Gleaner laughing as he entered backstage. “Get used to it because I will be back for the 2020,” he added.

The usual time for an Appleton Signature Nights performance is one hour, but 60 minutes was really too short for Wayne Wonder. Even when he was wrapping up, he lingered, having one last song to sing, and then another, and then another. Without missing a beat, Wayne was able to segue from the Real Rock riddim, to question, in his Buju voice, “How Massa God worl’ a run?”, to the currency of TJ’s “owna lane”, back to the “story of my life” and finally bringing down the curtain by “dedicating this one to my favourite girl”.