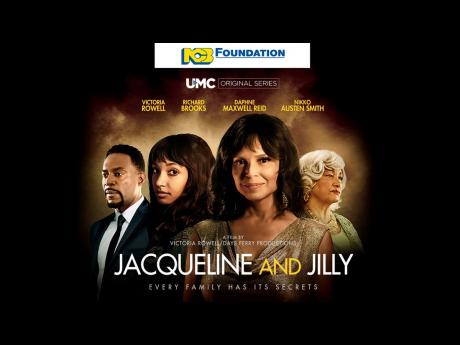 Contributed
A promotional poster for Jacqueline and Jilly, written and directed by popular actress Victoria Rowell.

In collaboration with Palace Amusement, popular American actress Victoria Rowell will be hosting a benefit screening of her film Jacqueline and Jilly. With the screening scheduled to take place at Palace Cineplex, Sovereign Centre, starting at 5:30 p.m., Rowell aims to fill the cinema’s 260 seats and continue her long-standing mission of reciprocity to wards of the State. Priced at $2,500 per ticket, proceeds from the viewing event will be donated to the Annie Dawson Children’s Home, which was introduced to the Young and the Restless star by her philanthropic friend, Dr Wendel Abel.

Rowell’s friendship with the world-class psychiatrist spawned others. She was also previously introduced to the Glenhope Children’s Home. In 2016, she collaborated with the Edna Manley College of the Visual and Performing Arts on a toy drive for both the Glenhope and Maxfield Park children’s homes.

Annie Dawson is the next benefactor, with Rowell grabbing another opportunity to give back to the same kind of community that nurtured her.

“I care because I spent 18 years in foster care in the US. I look upon that experience as a great opportunity to never forget and to practise reciprocity. That’s what has inspired me to continue to work in child welfare in any capacity that I can and [use] my entertainment opportunities to anchor a fundraiser such as what we’re doing today,” Rowell said.

As Rowell calls for support from the public, she also celebrates those who have already offered charity. “I am greatly appreciative of NCB Foundation, which is not only giving a donation to the home, but they also purchased tickets,” she revealed.

Rowell also commended The LAB, the agency currently hard at work editing her upcoming project. “They edited my soap opera, The Rich and The Ruthless, and now, they’re editing my reality show, Trash vs Treasure. It’s very important for me to integrate with post-production and that type of job cultivation. That’s why I love working with The LAB, employing Jamaican editors, musicians, sound and colour correction, hair, make-up. It’s not just come in, film, and fly away but to film Jamaican and, post-production, edit Jamaican,” she said.

One of the episodes of Trash vs Treasure was filmed in Grants Pen and is dedicated to Keisha, a street sweeper. A 90-second trailer for the reality show will be shown before the screening of Jacqueline and Jilly.

Rowell, whose father is Jamaican, wrote and directed Jacqueline and Jilly, a feature film that is centred on the global opioid crisis.