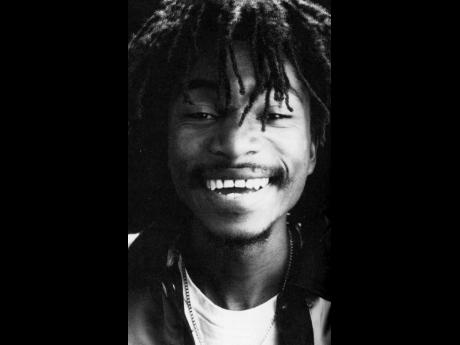 “‘But seek ye first the kingdom of God and his righteousness and all these things shall be added unto you.”

These are the words from St Matthew Chapter 6 that Garnett Silk chanted before every show, his former manager Bridgette Anderson, recalled.

Rastafarian singer, Garnett Silk, born Garnet Smith on April 2, 1966, was known for his emotive, smooth voice, and his songs, which explored deeply cultural themes, spirituality, along with romance. He was undoubtedly reggae’s brightest rising star and the world was his oyster. On the night of December 9, 1994, Garnett Silk met what many call an untimely death. He was 28.

History records that Garnett was sitting with a couple of friends at his mother’s house in Mandeville, Jamaica, on December 9, and a gun accidentally misfired, hitting a propane tank and setting the house ablaze. Garnett, his friends, and his two brothers made it out safely. However, Garnett’s mother was still inside. The loving son rushed back into the flames to save his mother, but they both perished.

Bridgette Anderson recalled meeting Garnett in 1991 at Eastern Consciousness, a concert in Portland. “Judy Mowatt was the first person to tell me about this singer with the great voice. Anthony Rochester, his co-writer, introduced me to him, and I started going to a few dances because back then, he was mostly working on sound systems. But he then decided to start doing band shows. I was labelled difficult for requesting a band for him, because everybody was so used to him as a sound system artiste,” she told The Sunday Gleaner.

Anderson recalls vividly the moment she heard of his passing. “I had just come from (producer) Mikie Bennett’s Christmas party and I got a call that Pee Wee (doctor) had gone to identify Garnett’s body. I told the person that she was lying. I drove down to Mandeville, straight to the hospital, and saw Pee Wee. He told me that it was Garnett and that I should not look at the body because I wouldn’t want to see him like that.”

She continued: “I had seen him earlier that week because he had a show with Richie Stephens at Mirage and he had driven up for it. I was no longer his management, but I told him that I was coming to the show, but I never made it.”

Richie Stephens, who was hosting his birthday bash at Mirage, then the happening nightclub, remembers that night clearly. He and Garnett had the number-one song in Jamaica, Fight Back, and they were going to perform it. “Garnett had been missing shows and people said he wasn’t coming, but he reassured me that he would be there. Just as the show was about to end, he turned up. I remember putting my hand on his shoulder and he was shaking. Him juss a vibrate as him a sing. Mi never experience nothing like dat. Then as him finish the song, him leave and drive straight back to Mandeville. That was the last time mi see him. Garnett was special.”

Reggae singer Anthony Cruz, Garnett’s nephew, told The Sunday Gleaner that he was in Florida when he got the call. “I went outside to sit on the steps, and the place just have a different colour. Is like the world just stop. His passing has made me look deeper into myself. I realise the meaning of the expression ‘a man is just a man’. The pain will always be there, but it has made me stronger. Garnett has had a profound influence on my life. The path he trod was one of spirituality and righteousness, and he touched a lot of lives.”

“I always reminisce on the last time I was with him. It was at Reggae Sunsplash 1994. After his set, he came off the stage and hugged me. We hugged for a long time. People outside the fence were shouting his name, and he went over to the fence and I joined him. Some were congratulating him on his ­performance, others were begging ‘a ting’. Garnett asked his manager for the balance of his fee and shared it up among all the people at the fence. I have been doing music productions for over 30 years, and I have never seen this done before nor since,” she said.

Anderson believes that Garnett’s passing has left a void that 25 years later, is still hard to fill. “Twenty-five years after Garnett’s passing, we have a lot of artistes coming out of Jamaica, but too many of them have lost the spirit of reggae music. I miss singers like Garnett who was all about winning souls through his music. ‘Bwoy, Buju (his name for her), we need some more souls’, he would say before his performances. Long live the works of Garnett Silk! Long live the spirit of Reuben!” she said.