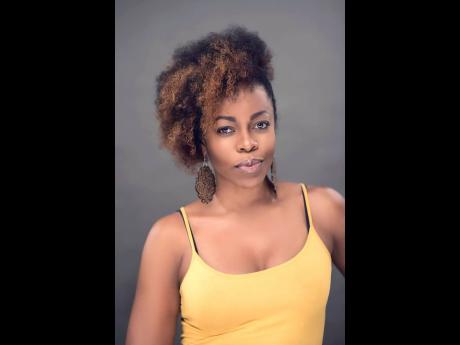 Aisha Davis is much more than a mere triple threat. Actress, dancer, singer, songwriter, voice tutor, voice-over artist, and emcee are just some of the specialist areas that dot her résumé. Trained in ballet, folk, L’antech, Afro-Caribbean, and Cuban techniques, Aisha is a recipient of the Alma Mock Yen Award for Excellence in Dance Theatre. However, the Bermuda-born entertainer, who relocated to Jamaica and attended Immaculate Conception High School, has hung up her leotards and is focused more on exploring the singing and acting arenas.

Aisha, who is obviously not short on talent, is not a regular on the local scene; however, she told The Gleaner that she does much more work overseas, perhaps owing to the fact that promoters tend to book “persons who are current and hype enough to draw a crowd”.

It was while enjoying success as a dancer, performing locally and also representing Jamaica in the US, Canada, and the Caribbean, that Aisha’s love for acting and singing came to the fore, and she embraced the moment. She has been part of the Jamaica Musical Theatre Company and, as a singer, has toured extensively as a solo act, as well as a lead and backing vocalist for Cocoa Tea, Shabba Ranks, Shaggy, Ky-Mani Marley, and Alborosie. Not only has she toured and performed to sold-out crowds in Europe, India, Africa, the US, and the Caribbean; Aisha has also performed at some of Jamaica’s top shows, such as Carifesta, Reggae Sumfest, and the Jamaica Jazz and Blues Festival. In 2012 she had the opportunity of being the opening act for reggae’s living legend and icon Jimmy Cliff in France.

She has amassed a large catalogue of singles and notable collaborations with the likes of Tony Curtis, Richie Stephens, and Anthony B, with whom she has the smash hit Someone Loves You Honey. Aisha, who celebrated a birthday on Wednesday, also collaborated with dancehall star Aidonia on two hit singles, Heart is Hers and In your Eyes, the former becoming a chart topper and securing them a nomination for best collaboration.

With singles We Got Love; We Got Love REmix, featuring Mr Lexx; and Funny Feeling, a collaboration with Double X (Flexx of TOK), getting quite a buzz on air, especially in South America, and her debut EP in the making, Aisha is wrapping up a successful run as Gina Robinson in David Tulloch’s comedic drama What Goes Around and as Lisa in the Dredz production Special Cuts.

5 Questions With … caught up with Aisha during her fantastic performance at Grosvenor Terrace last weekend.

Describe yourself in one sentence.

What do you do when you are not exploring your creative side?

Mainly relaxing at home with my son. However, I enjoy going to the movies, and I like a good party, but I am very selective. I like soca, so a party with that kind of music would have appeal.

Do you jump in carnival?

I like the music, but I don’t subscribe to the nakedness, and I don’t believe in spending so much money on a costume.

What would somebody of the opposite sex have to do to catch your eye?

(Laughs) I don’t have a type. But I am attracted to ambitious, confident men who are passionate about their work.

How do you celebrate Christmas?

Well, for starters, I don’t have any decorations up and will not be putting up any. I like the part that includes the gathering of family and the breaking of bread together.