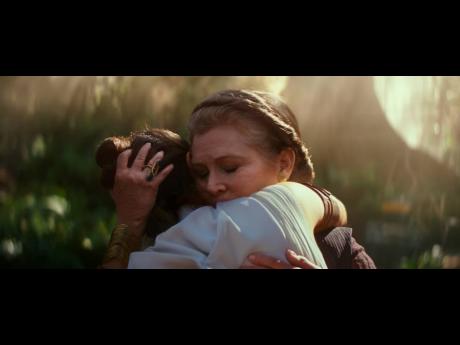 AP
The late Carrie Fisher (right) as General Leia Organa, and Daisy Ridley as Rey in a scene from ‘Star Wars: The Rise of Skywalker’.

Carrie Fisher’s brother Todd Phillips has shared a letter she wrote about death.

The late Star Wars: The Rise of Skywalker actress – who passed away on December 27, 2016, of a heart attack – penned a note about death and a “new heavenly location”.

The letter read: “I am dead. How are you? I’ll see you soon ... I would call and tell you what this is like, but there is no reception up here. Cut. New scene, new setup, new heavenly location. I have finally got the part that I have been rehearsing for all my life. God gave me the part. This is the end of the road I have been touring on all my life.’”

Phillips explained to the New York Post’s newspaper: “Either it was something Carrie wrote long ago because she was doing a story on death, or it just materialised from beyond. She was writing as if she was dead and what it was like ... It just blew my mind. I thought, ‘Wow, why am I finding this right now?’ I know Carrie’s writing inside and out. It’s unmistakable.”

And Phillips says watching Star Wars helps him to cope with Carrie’s death.

Phillips shared: “A lot of people asked me when they died, ‘How do you deal with it?’ Part of it is the faith that we all shared, my mother, my sister and I – the idea that we shall meet again, and they’re not far from you. They’re just in a different space or a different dimension.

“There are a lot of words you can attach to [that]. The word ‘force’, for example, is [ Star Wars creator] George Lucas’s choice word, but you could interchange the word ‘faith.’ I find a lot of that comforting, frankly.”