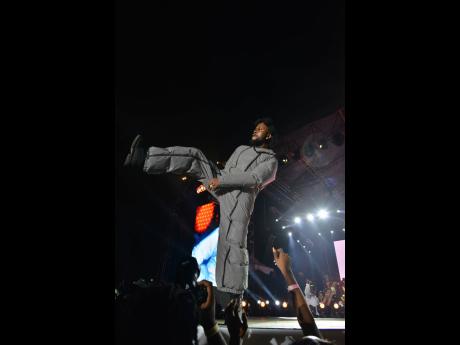 “This is a St Thomas product. I’m so proud of St Thomas tonight. This is my hometown, so whatever me get, me share it with my hometown,” Popcaan said as he addressed the massive crowd that converged on the Goodyear Oval in the parish for Unruly Fest.

Often described as the ‘forgotten parish’, St Thomas does not usually see a lot of action, especially where live entertainment is concerned. But it seems all that is about to change as Unruly Fest stamps its class on the industry.

Although just in its second year, Popcaan’s Unruly Fest is fast becoming one of the best live entertainment events in the island. Saturday’s show yielded such a massive turnout that it caused a traffic pile-up that stretched for miles leading to the venue. But a two-hour wait in traffic was worth it once one arrived at the event.

Patrons were treated to unforgettable performances from a line-up that included the likes of Sanchez, Capleton, Bounty Killer, Beenie Man, to ‘90s front-runners Frisco Kid and Mr Lexx, to new generation artistes Chronic Law, Stylo G, Quada, and Skillibeng. There were zero disappointments as far as performances were concerned as each artiste delivered on the promise of quality entertainment.

So engrossed were patrons that even when it began raining in the wee hours of Sunday morning, many stood in the downpour, refusing to miss out on a minute of the onstage action. A few told The Gleaner that with Unruly Fest shining much needed light on their parish, their attendance was their way of saying thanks to Popcaan and his team.

“In two years, this event has done more for the parish than what heads of governments have done in decades, and that is something worth supporting,” said Kaylia, who travelled from Montego Bay for the show. “If you take a good look in the venue, you will see how much this show means to the people of St Thomas. They came out in their numbers. When last you hear so much people a come a St Thomas? This show is a blessing, and I really just want to wish Popcaan and his team all the best for the event in future years.”

There were praises all round for the Unruly Boss as his colleagues lauded him for his commitment to the parish. Speaking with The Gleaner at the event, producer NotNice said that he wants to see Popcaan offered some assistance to expand the Goodyear Oval for next year as he anticipates an even bigger event in 2020.

“Da show yah a go even bigger next year. So, I think dem need to dig off some more a di land and widen the road so we get some more space. Popcaan is for St Thomas, so me personally wouldn’t want see him bring the show go a town,” he said. “St Thomas people need this. People outside a park car, a sell dem chicken and dem soup. It’s a hustling day, a source of income, and di people out here nuh normally see so much activity. Not even Paul Bogle bring so much activity inna di place, so we thankful for the festival and we give thanks fi Popcaan.”

Declaring that he has already been booked for next year, ‘90s dancehall artiste Frisco Kid also heaped praises on Popcaan. “Me booked for next year already, innu, because, yuh done know, we affi show real people real support. Popcaan come in like me likkle bredda. Me love him and respect him fi weh him a do for St Thomas because is like dem forget da parish yah,” he said.

“Me a come di road dem nuh look good, me a dilly and a dolly and a drop inna pothole. Popcaan as a likkle yute come make things a gwaan dung yah, so we want the investors dem come in, too. The Government need to come in on this, too. Him a do a great job, but him need help and him need support. Make we unite and support him. Is a yute weh clearly nuh forget weh him come from, and yuh affi support yute like dat,” said Frisco Kid.

That much was expressed by the man of the moment himself when he spoke of his place of birth. “Me forward from a place round deh so, round a Bath, round a Hayfield. Nuff people nuh know about it. Dem probably never heard about these places. A deh so Popcaan forward from up inna some bush,” he shared. “God bless me wid a talent weh me a share wid di world. Unu know why mi keep da show yah a St Thomas? A because me never figet weh me a come from.”