‘Star Wars The Rise Of Skywalker’ – the anti-endgame 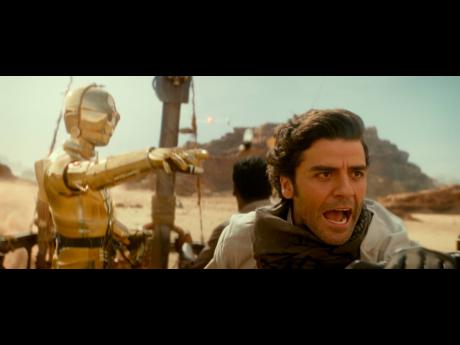 AP
C-3PO, portrayed by Anthony Daniels (left), and Oscar Isaac as Poe Dameron seen in action in the movie ‘Star Wars: The Rise of Skywalker.’

There’s a moment in the middle of Star Wars: The Rise Of Skywalker when Rey is approached by a new droid. It takes a step back as she reaches her hand out, bringing her to the conclusion that it had been harmed before. “It’s all right,” she says. “You’re safe now.” She hits a button to essentially reboot it. It’s a moment that has no bearing on the story, except that it reflects entirely how J.J. Abrams views the Star Wars fandom, a collection of people who were hurt by The Last Jedi but are now in safe hands that understand them.

This is how The Rise Of Skywalker feels. Safe. When The Force Awakens came out in 2015, that word was thrown around a lot. It had several familiar concepts: a planet-killing weapon, a nobody hero from a desert planet, a bad guy with a black helmet who speaks through an intercom. But even with the familiar, there was still a sense of innovation. You had a storm trooper with a conscience and a villain with a strong inner conflict. More than that, The Force Awakens felt like a movie about something. A new generation trying to figure out their place in a world that was so profoundly belonging to the old one.

Star Wars: The Rise Of Skywalker has none of that. It’s so often a retread of the old and familiar that it forgets to do anything of its own. In fact, it even reverts some of the brilliant subversions of The Last Jedi. It does so in a way that feels punitive, almost as if to change is an offensive notion for the biggest movie franchise in history. It even has problems on a basic level. The first half of the movie is so incredibly rushed that the characters are essentially racing to get from one point to the other. It works best when things slow down, but then it’s bogged down by set-up for the next scene.

It’s not so much that you can’t enjoy the movie. It’s still Star Wars. There are spaceships, lightsabers, villains, and heroes. It’s just that having seen how good Star Wars could be, it’s a shame that the finale to this saga is such a whimper. It feels like a knife that’s been used for too long, and now it’s just dull.