Chalice has BOJ audience dancing in the aisle 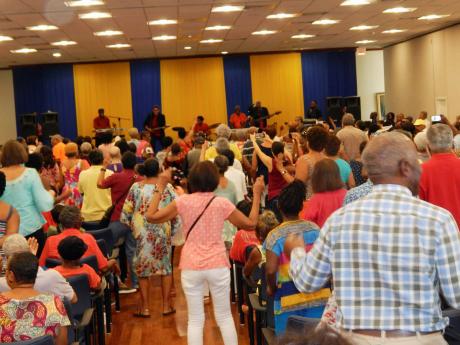 Michael Reckord
The audience dances in the aisle during the Chalice concert at the BOJ last Friday. 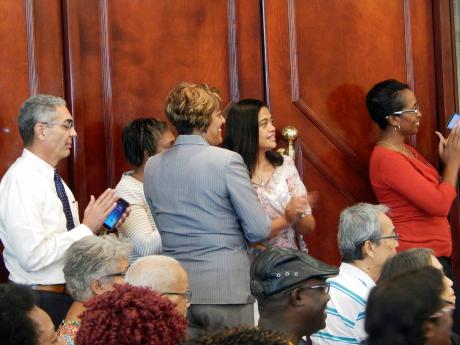 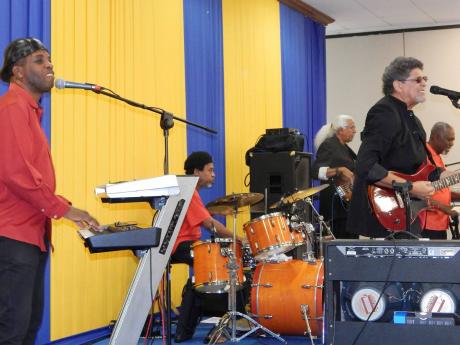 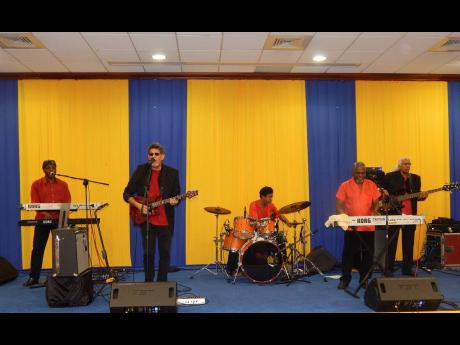 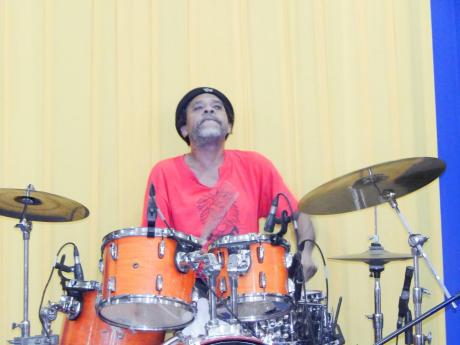 Just three months shy of its 40th birthday on April 1, Chalice remains one of Jamaica’s most popular bands. Not surprisingly, then, there was standing room only for its lunchtime concert last Friday at the Bank of Jamaica.

One of the 15 or so people standing – though just for a bit, until a colleague gave him a seat – was BOJ Governor Richard Byles himself. He stayed for the first 40 minutes of the hour-long show and missed the climactic medley of Revival Time and Lloyd Lovindeer’s Pocomania Day, which had the audience dancing in their seats and in the aisle.

They were following the urging of band leader Wayne Armond, who, as the opening chords of probably the group’s most popular song sounded, declared: “You not sitting down for this one. Everybody get up.”

After the dancing, the group was packing up their instruments when the emcee, Arlene Tomlinson, who had initially introduced the band, returned to the stage. “I know you want more,” she said. With cheers and applause, the audience agreed and the band unpacked and performed a poignant song written by drummer Desi Jones, I’m Trying to Keep Jah Music From Dying.

Like the others, it was sung by Armond, who also played lead guitar, and by backup vocalist and keyboardist Chris McDonald. Other band members were Irvin Lloyd and Jerome Tulloch (who alternated on keyboards) and bass guitar player Richie McDonald.

After the show, interrupted three or four times by patrons who wanted to have their cell phone picture taken with Armond, I was able to have a quick chat with him about the group. One reason for the band’s longevity, he said, was the feeling of respect and brotherhood shared by members.

“We are a family,” he explained, reminding me of the loss the family had suffered. “Three of the original members are no longer with us.”

And he said there were sometimes disagreements over music. He mentioned a recent “big fight” with Jones about the arrangement of a song. “But after the fighting, there’s peace again,” he said.

Asked about his plans for the band for the coming year, he said that the group does not sit and plan for the future. “People call me to play here and there and we go. We don’t have a management team.”

Was he happy about that state of affairs? I asked. He said, “No, but we don’t want just any management team. We want one that believes in us as strongly as we believe in ourselves.”

The uptempo opening song, Praise Him (I lick a chalice an ah praise him), set the tone for the concert as a whole. Most of the songs were lively reggae numbers.

Two of them were given a touching context. Armond said that during the 1980s, the band used Jimmy Cliff’s Trapped as “a bullet against South Africa’s apartheid regime”. He introduced the second with the observation, “The real songs are the ones that come from your experience; they are the ones that touch the heart. This is a personal song for me.”

His tone soaked with sincerity, he moved into the opening line, “ Woke up this morning to find you gone.” Near the end of the song, apparently overcome with emotion, he paused for a long while before delivering the final line, “I still love you.” The audience cheered.

Among other well-received songs were Dennis Brown’s Have you Ever Been in Love, Jones’ humorous I Think I Love you Better With Stew Peas in Yuh Pot, Cyan Rub Cyan Dub Cyan Wine and Reggae Rock Tek Over The World.

Saying she hoped the audience enjoyed themselves at the BOJ’s last lunchhour show for last year, the emcee assured the patrons that this year’s shows will be “even better”. She was referring to the bank’s free, monthly, last-Friday shows which were started some 30 years ago by the BOJ’s first Jamaican governor, G. Arthur Brown. There was a 10-year-long break in the series between 1997 and 2007.