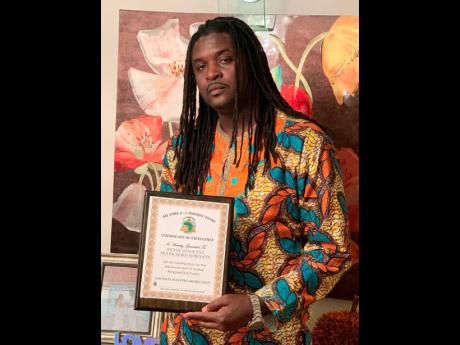 Contributed
Richie Innocent holding the Certificate of Excellence he received at the Sarabita Masters Award in New York.

Dub Poet Richie Innocent recently received a certificate of Excellence at the Sarabita Masters Awards in New York for his contribution to the global advancement of dub poetry.

The Kingston-born poet, who is known for poems such as Where Are The Warriors, featuring Wise Wurdz, Community, and Good Old Days, said he is grateful for the award.

“This award was given to me by Ras Atiba, the founder of the Sarabita Masters Awards, in recognition of my work as a poet in the global poetry space. Ras Atiba is one of the foremost dub poets and promoter of dub poetry in New York, so it is an honour to receive this award from him and his organisation,” said Richie Innocent.

He also added: “I’m happy to be a member of the new generation of dub poets in Jamaica. Together we are waving the dub poetry banner high and spreading the energy around the world.”

The Sarabita Masters Awards is an annual event which was founded by New York-based Atiba (given name Emile Ivy). The first staging of the event took place in 2012

The 2019 staging of the Sarabita Masters Awards was held at Stratosphere Studios in Brooklyn, New York, on December 20.

The St Elizabeth-based poet has also been nominated for the Mutabaruka Award in the Best Dub Poet/Spoken Word Entertainer category at the International Reggae and World Music Awards.