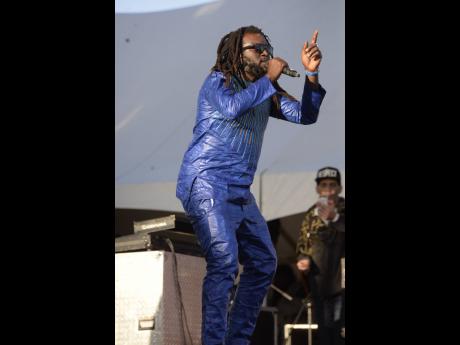 Roots reggae singer and environmentalist, Chezidek, may appear to have been absent from the music scene for a minute, but the artiste says that’s not really so.

“It’s just that the people appreciate me more in other places outside of here (Jamaica). In Christmas and new year, we did the islands. They have the space down there in the Caribbean for the roots. But the love here is real, still,” the Leave the Trees singer told The Gleaner.

Chezidek, obviously possessing a deep passion for roots music, blamed “the system” for not disseminating it to the people. “The people, when them get a chance to ‘fulljoy’ roots music, dem enjoy it. But the music get a little way sometimes. Some people decide what music must be heard,” he lamented. He also acknowledged that there is a cycle. “Sometimes it comes back around to roots, but right now we not getting none of that,” the herbalist said.

He admitted, however, that last year, while he did a few shows locally, he spent more time in the studio than on the road as a touring artiste. But, with the imminent release of his latest single, Because I’m Black, and the anticipated release of a full-length album, things will definitely change for 2020.

“We are going on the road this year. The fans long to see us. Dem want we down inna Europe, and then later in the year it’s on to Merka (America). Last year was a lot of writing and recording. I’m working with Tad’s Record, so they are the ones who are in charge of the releases,” he explained, pausing to thank producer Tadiem ‘Tads’ Dawkins Sr for helping to steer his career. The plan, he says, is to drop the single in February in celebration of Black History Month and Reggae Month.

Chezidek has made huge predictions for the success of Because I’m Black, which could even follow in the footsteps of another song, Call Pon Dem, which was featured in Grand Theft Auto IV.

“This one is going to be a monster. It is an international anthem for black people, with a strong message of unity,” he said, comparing it to his All My Life single, which has amassed over 31 million views on YouTube. “That song isn’t really playing much in Jamaica, but whenever I touch down in Europe, mi haffi sing it. To be honest, the people know the words more than me.”

Regarding the album, whose title he confirmed as being the same as the single, Chezidek noted that it will have between 12 to14 tracks. “We nah full it up too much; just the right medicine,” the former member of the St Ann Marching Band stated.

Because I’m Black, which is Chezidek’s 11th album, has a June release date, and is expected to have “the right dose of redemption, unification and upliftment for people who have been downpressed”.