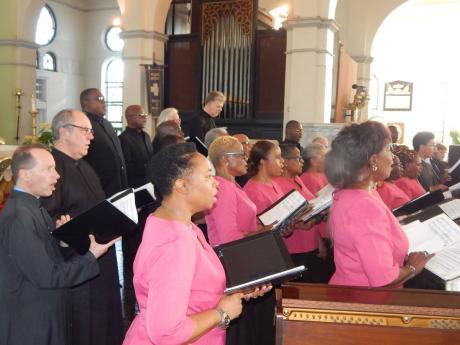 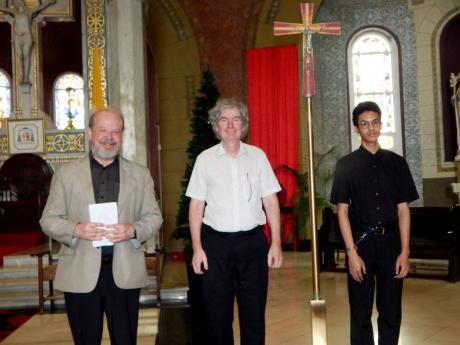 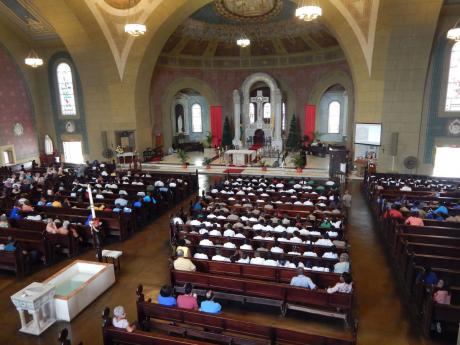 The Cathedral Singers of Ontario, Canada, and their organists flew out of the island on Monday after helping out two local churches for 10 days. A spokesman said they all had a “wonderful time”.

Members of the group conducted workshops with local musicians and participated in two performances to raise funds for purchasing or repairing the churches’ musical instruments. Three of the organists gave a lunch-hour recital at the Holy Trinity Cathedral, North Street, last week Wednesday, while the whole choir sang at a concert at the Kingston Parish Church, South Parade, on Sunday.

A 15-year-old, award-winning organist with Jamaican roots was one of the visitors. Joshua Duncan Lee, grandson of the late Joyce Duncan, a former organist at St Richard’s Catholic Church, Red Hills Road, played at both events.

The Holy Trinity Cathedral organ recital was the initial fundraising effort of the church to purchase a grand piano. The rector, the Very Rev Fr Kingsley W. Asphall, told the audience that young people in the community would be offered music lessons at the cathedral.

Not only was the turnout larger than expected – so much so that the programmes ran out early – but the listeners were probably more enthusiastic than expected, too. No doubt the presence of students from three of four Corporate Area schools, who would have missed classes that day, contributed to the generous applause.

Six compositions were played in a programme that the leader of the ensemble, Angus Sinclair, said was chosen to showcase the full capabilities of the 2,000-pipe organ, the largest in the Caribbean. They were not popular pieces known by the average music lover, but all were given sustained applause by the audience. There were even a couple of cheers when Lee ended the recital with a particularly lively (but unlisted) tune, Finale Jubilante by Healey Willan (1880-1968).

Not surprisingly, the concert at the 325-year-old Kingston Parish Church was a more splendid affair. The organists were only three of scores of musicians who performed at the event staged to raise funds to fix the historic church’s 111-year-old pipe organ.

Unfortunately, though the failing organ was ‘patched up’ for the occasion, it gave up the ghost before its final item for the evening could be played. This was mentioned to the audience by the pastor, Father Louis Hurst, who added, “Now you know what your contribution is going towards – along with our ministry in the downtown area.”

Singing with the Canadian choir were three local ones, The National Chorale of Jamaica, The Diocesan Choir, and The University Singers. In the 18-item programme, we heard the individual and combined choirs, as well as an organ solo by Lee.

While it was difficult to discern which items the audience preferred, as all got good receptions, I thought that the applause given to the livelier pieces was a bit more enthusiastic. Those items, all in the second half of the nearly two-hour-long concert, were Beethoven’s Joyful, Joyful; Hallelujah (sung by the Diocesan Festival Choir); Alleluia! Laudes Creaturarum (composed by Franklyn Halliburton, director of The University Singers, and sung by the group); Grand Chorus from Jonah (composed by Samuel Felsted, another Jamaican); and Noel Dexter’s Psalm 150 (sung by the combined choirs), which closed the concert on a rousing note.

What the other pieces lacked in excitement they made up for in sincerity. These included compositions by Schubert ( Mass in G), Gounod ( Sanctus from Mese Solennelle), Pachelbel ( Canon in D), Brahms ( How Lovely Are Thy Dwellings from Requiem) and Tom Settke ( The Majesty and Glory of Your Name).

During a laughter-filled post-concert session in which the Canadians and the hosts exchanged gifts and votes of thanks were given, Sadler said it would be hard for the visitors to get on the plane the following day after the “wonderful visit” and the work done with the “wonderful choirs”, which the visitors would “remember forever”.