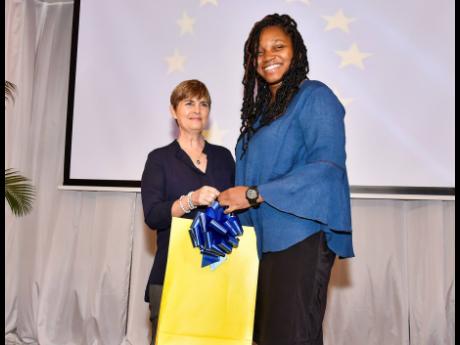 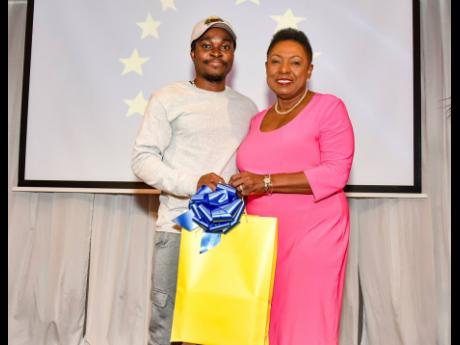 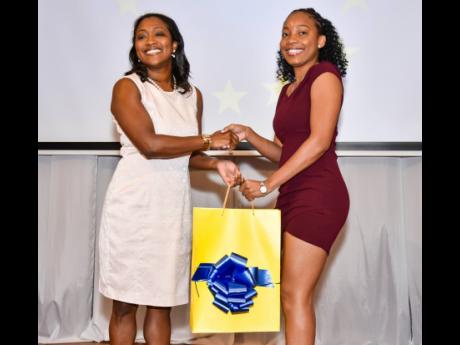 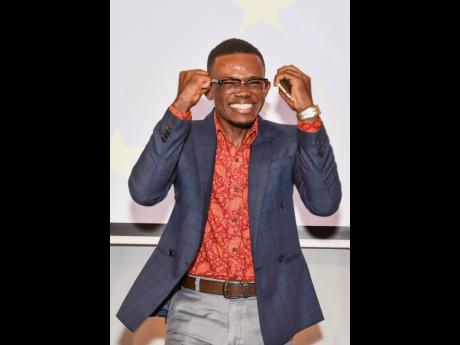 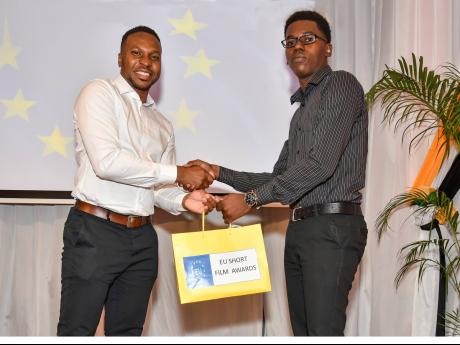 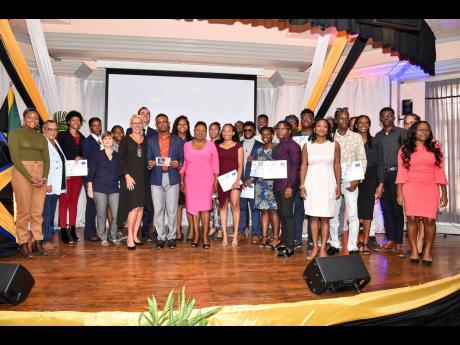 Contributed
EU Ambassador, Malgorzata Wasilewska, and Minister of Culture, Gender, Entertainment and Sport, Olivia Grange (centre), share the lens with 21 of the finalists and some of the competition's organisers and partners at the EU Short Film Competition Awards Ceremony at the Institute of Jamaica on January 15.
1
2
3
4
5
6

Young film-maker Deron Douglas could not contain his excitement, when his film, The Tree Speaks was selected as the first-prize winner during the first-ever European Union (EU) Short Film Competition awards ceremony. Douglas’ affirmations sounded from deep in his belly, and his enthusiasm filled the Institute of Jamaica’s auditorium. The happy energy spilled from the stage to be swept up in the applause and giggles of his fellow finalists. Douglas was one of 22 finalists selected for the short film competition, conceptualised by the EU as an effort to simultaneously support the development of the local film industry and to encourage awareness of global environmental crises and responses.

Under the theme ‘My Environment, A Heritage To Be Protected’, the film-makers were each tasked to produce a three- to five-minute film. They had approximately one month to do their work, and though 25 contestants were shortlisted, in the end, 22 films were selected for the judges.

“The short film competition began as a promise, which we, as the EU, made during our annual European Union Film Festival last year in May to provide an opportunity for young people to build the capacity to take advantage of the opportunities available in the creative industries and to provide a platform for them to become advocates for environmental protection,” Ambassador Malgorzata Wasilewska, European Union Delegation to Jamaica, said during the ceremony.

Film commissioner Renée Robinson noted that the past few years of the local film industry have been transformative. She celebrated that the competition utilised the industry to create content for the important message ‘there is no planet B’. “I don’t think many people are aware of the volume of the work that’s being done by the persons who are working in this industry. There’s been a lot that’s happening on the local scene, a lot of new content that is actually gaining space and presence internationally – winning awards and being a part of a larger discussion about what’s happening with Caribbean content. There’s a lot to be proud of, and there is a lot more work to do,” Robinson said.

Wasilewska continued: “This is the European Union’s first-ever staging of a competition of this nature in Jamaica. We are happy to know we have been able to provide this opportunity to young Jamaicans. I want to salute young people in Jamaica who are challenging common misconceptions about youth, including that they’re socially disengaged and apathetic about the future.”

Douglas proved Wasilewska’s observation true. As recipient of the Best Film award at the competition, awarded for his first attempt at film-making, Douglas will be catching a flight to Germany on an all-expense-paid trip to participate in a short filmmaking course at The METFilm School (Berlin). “It’s a part of me to be involved in the issues of the environment,” he told The Sunday Gleaner. In his parish of St Thomas, he stands witness to deforestation and its adverse effects, so he decided to spread awareness through film.

All the finalists were acknowledged for their participation, but there were other standout emerging film-makers who impressed the competition’s judges. Danielle Mullings, a student at The University of the West Indies, won the Best Storytelling prize for her film Protecting Port Royal’s Mangroves. She took home an iPad Pro. Latanya Martin won Best Editing for her film The Change Starts with You. She was awarded a MacBook Pro. The Best Cinematography award was won by Kemanie Boothe, a student at the University of Technology, Jamaica for the film It Lives and It Breathes. He won a video camera. Impressed by the filmmaker’s passionate approach to his project, the judges added another prize for Jahvar McLean on his production of The Parish Capital. He received four editing sessions from Frame of Reference.

The judges were president of JAFTA, Analisa Chapman; film producer Justine Henzell; chief operating officer of Frame of Reference, Fonique Richardson; lecturer at the Caribbean School of Media and Communications at The University of the West Indies, Mona Yvette Rowe; executive director of the Jamaica Environemt Trust, Susan Stanley; and communications specialist with the European Union in Jamaica, Althea Buchanan.