Pantomime: a community drama with colour and music 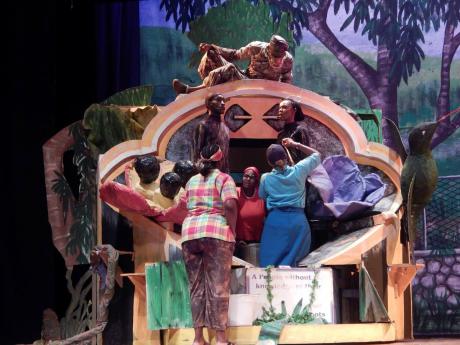 Michael Reckord
Residents cleaning up the statues in the park while Crocodile (Ray Jarrett) looks down on them. 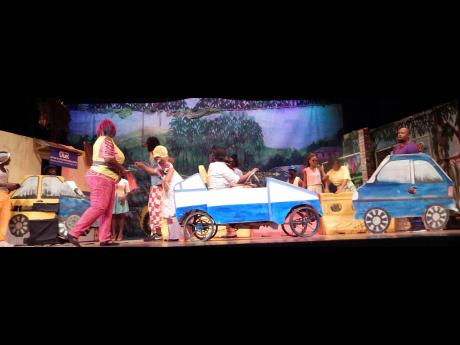 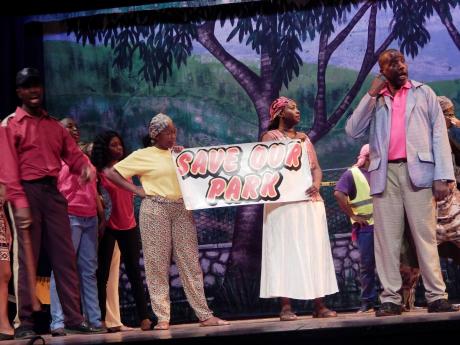 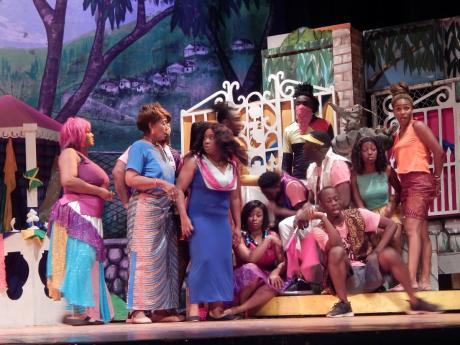 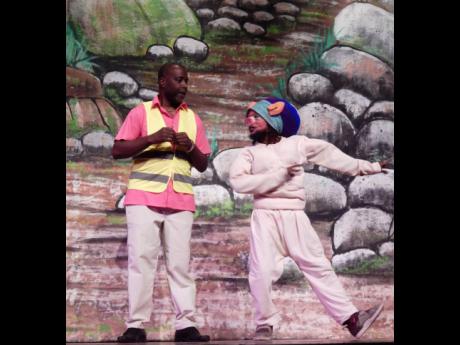 Because of the approach taken by the Edna Manley College’s School of Drama and the Sistren Theatre Collective, community drama in Jamaica is about helping communities to solve social problems. Often, the dramatic work is created through discussions and workshops involving community groups.

In many ways, this year’s Little Theatre Movement (LTM) pantomime, Ruckshon Junction, at The Little Theatre is a community drama – one with lots of levity, music and colour. For one, the script and lyrics were created by a community, the Pantomime Company.

This was done in workshop sessions led by the director, Robert ‘Bobby’ Clarke, and Anya Gloudon-Nelson, the costume designer and production coordinator. There was additional material by Barbara Gloudon, who was the LTM’s chief playwright over the last couple of decades.

The music for the 14 or so songs was the composition of four persons, musical director Asley ‘Grub’ Cooper, Noel Dexter, Calvin Cameron and Jermaine Gordon. One of Louise Bennett-Coverley’s poems, Crossing Crosses, was set to music.

Theatre Manager Michael ‘Rufus’ McDonald and his ‘crew’ designed the very effective lighting, and even the movement was done by a group – the duo of Kevin Moore and George Howard. That much-repeated statement about a theatrical production being a team effort was certainly proved by the production.

The director was constrained to comment on the fact. He writes in the programme: “In working to build this production, we had to build as a team, valuing every single individual and every passing thought and idea. The result of that was discovering along the process, a way to utilise the creativity of a group of people to entertain and inspire thoughts and feelings, and it is always a rewarding experience.”

On Sunday afternoon when I saw the musical, the audience generally had that rewarding experience. Judging by the laughter and applause, all were entertained, and the many schoolchildren, who came in buses, were often inspired to talk back to the characters, warning a muscular pig (played by Derrick Clarke) of the danger he faced from a stalking crocodile, Crocodylus Acutus (Ray Jarrett), or answering questions thrown from on stage.

These two talking animals were among an unusually large number of main characters. The team spirit extended even to this aspect of the story, which had its origins in the 1991 LTM pantomime Mandehyah (a reference to Nelson Mandela), which, the authors remind us, ”looked at our connection to our roots, national heroes and how Jamaicans dealt with issues of the day, including politics”.

Because Ruckshon Junction’s storyline is also built around various “issues of the day”, it is rather amorphous. The problems the community of Top Junction encounters include traffic jams, a park in disrepair and unemployment.

A politician, Ignatious Biggleton (Carlton Butler, on Sunday – though his character, like most others, has an alternate), is the main villain. But he is not very villainous. He makes election time promises that he never keeps, and he wants to tear down the monument in the community park to build himself a helipad.

Curiously, his party colour is the exact shade of orange that the People’s National Party uses and there are many scenes with his followers decked out in their orange T-shirts and jeans singing, dancing and praising him. Of course, they turn on him when he won’t pay them for work done.

Curiously, too, Biggleton is able to get the crocodile, the animal on our coat of arms, to be a crony – a rather unreliable one, admittedly, for the creature’s main intention in the play is to eat the pig. The village matriarch, Miss Vie (Maxann Stewart Legg) and her daughter, Kenya (Tiaunah Coore or Jasmine Lue), are Biggleton’s adversaries. Of course, the latter triumph in the end and the show closes with the customary joyful dance and song.