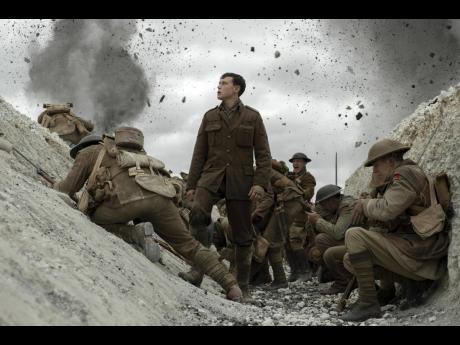 MCT
This image released by Universal Pictures shows George MacKay (centre) in a scene from ‘1917’, directed by Sam Mendes.

From the moment I first saw the trailer for Sam Mendes’ 1917, I was intrigued. In it, the main character is running towards the camera and suddenly the film is cropped to only be seen through the text ‘1917’. It was a neat trick of editing that drew my attention, and could easily be regarded as a gimmick with no real substance. A pointless trick. Unlike the film, which employs a ‘one-shot’ technique that is no gimmick but, instead, an artistic decision that serves the film tremendously.

1917 was not, in fact, shot in one take, but is a carefully constructed collection of takes made to look like one. The story follows two soldiers in The Great War as they trek across enemy territory to deliver a secret message to their fellow brothers in arms. From the get-go, the one thing that’s made abundantly clear is that time is of the essence. Which is what makes 1917’s film-making so intrinsic to the tale.

Most films are made up of cuts from scene to scene. Time passes, and the viewer is left to estimate just how much. Typically with the help of dialogue or a glance at the timer counting down until a bomb explodes. With this film, however, you’re locked into the journey in real time. You will be reminded of this with clever tricks, such as a plane disappearing and reappearing in the background, or a flare falling away in the distance. Everything in 1917 is connected, and meant to take you on an immersive journey through one of the worst battlefields in human history.

The characters traverse through massive sets as the film puts you in long stretches of trenches. It’s never lost on you how far they have to walk, and how treacherous the environment is. You’re constantly in a state of dread, and at the same time, it looks magnificent. Roger Deakins is a legendary cinematographer, and crafts another classic here.

The film-making is legendary and it’s serving the story of two young men dealt an impossible task with the weight of the world on their shoulders. It’s emotional, frightening, and carries a message of what it means to do the right thing against all odds, and finding the point in things that seem pointless.