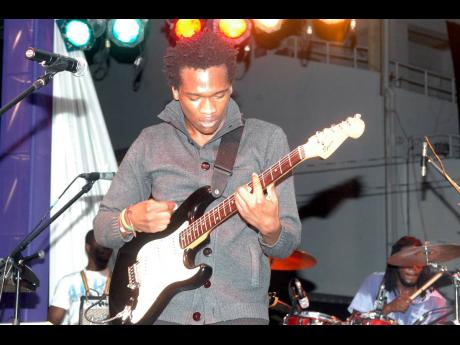 Reggae Month activities are not just focused solely in the corporate area. Thanks to Kumar Bent, live music lovers of the breadbasket parish of St Elizabeth, the musician’s home parish, are invited to lace up their boots and join the trek on Kumar’s Kulture Walk. With a start on February 1, the singer organised a series of live music events at various locations across St Elizabeth – with the intent to expose talent, and introduce some musical excitement into an otherwise relaxed part of the island.

“It’s a lot, but it’s happening. There are a lot of artistes from Black River, Treasure Beach, and there’s nothing happening here on a regular basis, in terms of live events. I saw the opportunity to invite my friends in the music and I seized it. I would have loved to contribute more to Reggae Month in Kingston, but I think there’s enough happening, and enough people there to make it happen,” the former lead singer of Raging Fyah told The Gleaner. So with Kingston already a hotbed of Reggae Month activities, Kumar planned some events of his own.

On Feburary 1, Kumar’s efforts opened with Kulture Walk Live, headlined by himself and veteran performer Ken Boothe. Also featured were up-and-coming acts Kenny Smith, Shari Jacobs and another Raging Fyah alum, the band’s second and last lead singer, Journey. “He’s from St Elizabeth. We’re trying to push St Elizabeth talent. The band that played for Ken Boothe are actually my little cousins from St Elizabeth. They’ve been training and we got them to the level where they’re able to perform and play on a stage. That’s one of the main focuses. I’m trying to influence the people from my side of Jamaica,” Kumar shared.

He is also trying to deepen his roots, and produce more fruit for his home and family. Kulture Walk Live opened at a venue of the same name – Kumar’s own juice bar – to be opened soon. “I built the building, it’s already there.”

On February 7, Kulture ‘walked’ to Las Vegas Cafe in Black River with the same line-up, minus Ken Boothe. There, the vocalists were backed by Tension Invasion band from Montego Bay. The following day, Treasure Beach was treated to Kumar, Indie Allen and Yaadcore – all presented with a live band. “All these events are live bands, because I’m trying to make sure that we don’t do any sound system performances from the acts that we’re trying to endorse. I’m really trying to pull talent into the parish and share the culture, as the name suggests,” he added.

Kumar’s penchant for planning isn’t new. Years ago, he was instrumental in developing Wickie Wackie into the prime beachside concert location it is today. “When I started Wickie Wackie years ago with the Raging Fyah guys, it was something I had a passion for to keep doing events that can expose talent, because a lot of people came out of Wickie Wackie. Some of the stars now, their first show was at Wickie Wackie. So it’s really exciting to see that it’s happening again in St Elizabeth,” he said.

“My album is actually ready. I’m in the final stages. And it’s not fully reggae, as people might expect from me because of my history. This album is really a feeling. It’s where I’m at in my life. It’s some honest songs with honest emotion that I’m trying to put out there. I think my fans and people who have listened to me in the past with Raging Fyah will appreciate my emotion, my honest true self,” he said.