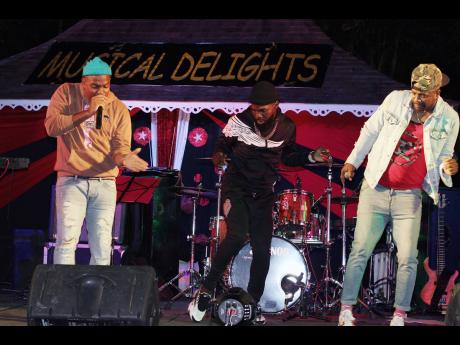 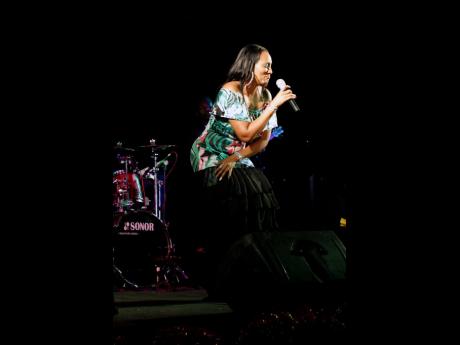 Stephanie Lyew
Singer Althea Laing breaks it down on stage. 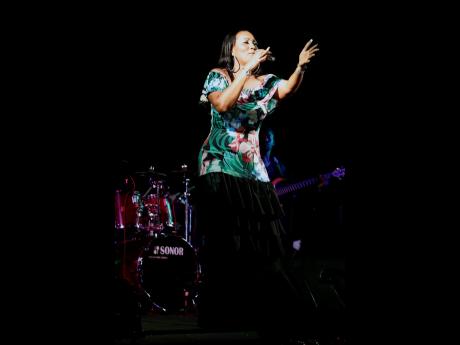 Stephanie Lyew
Hitting the highest of notes was easy for Althea Hewitt during her set for XII Musical Delights hosted by The Lions Club of Kingston at The Jamaica Pegasus. 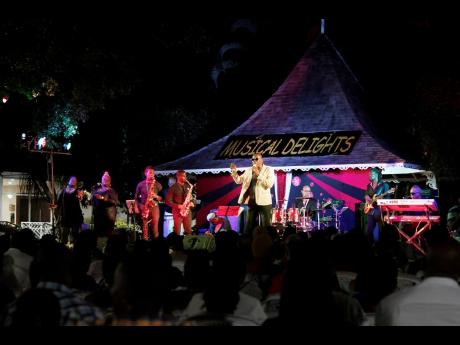 Stephanie Lyew
Former lead singer of The Heptones, Leroy Sibbles, holds the attention of the audience seated inside The Jamaica Pegasus Hotel gardens for XII Musical Delights on Sunday, February 9. 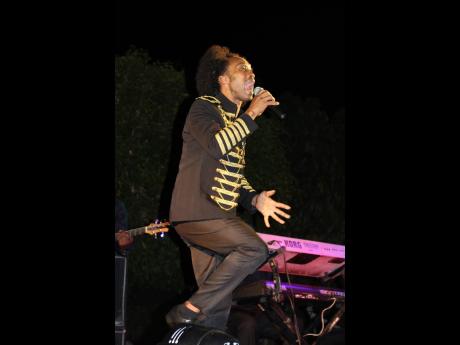 Stephanie Lyew
Rojah’s high jumps and kicks were not to be missed on stage at The Lions Club of Kingston’s 12th annual XII Musical Delights held in the gardens of The Jamaica Pegasus Hotel. 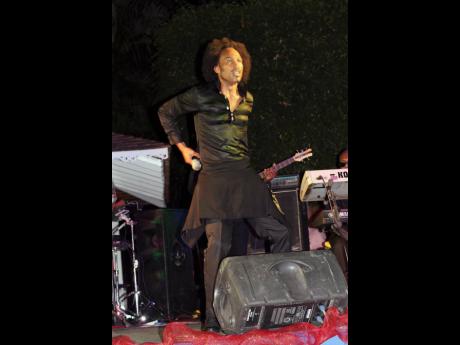 Stephanie Lyew
Rojah takes a moment to tie his jacket around his waist to hide evidence of a torn pants which was a result of an energetic presentation for XII Musical Delights on Sunday, February 9. 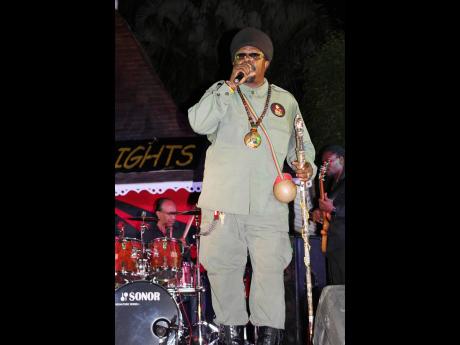 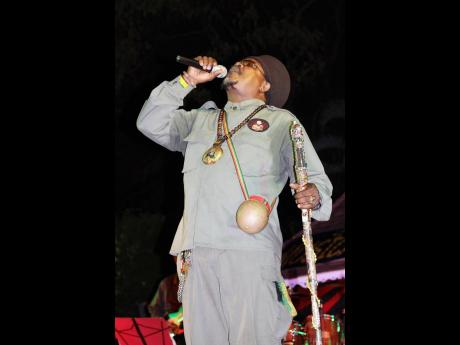 Stephanie Lyew
Roots-reggae artiste Luciano gets into the roots-rock-reggae spirit as he sings out Sweep Over My Soul to set the mood. 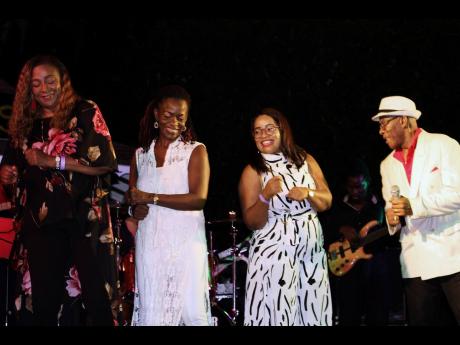 Stephanie Lyew
Errol Lee of the Bare Essentials invites (from left) Sharon Hastings, president of The Lions Club of Mona, Sharon Wever and Tracy July to imitate the I Threes for a lyrical tribute to Bob Marley 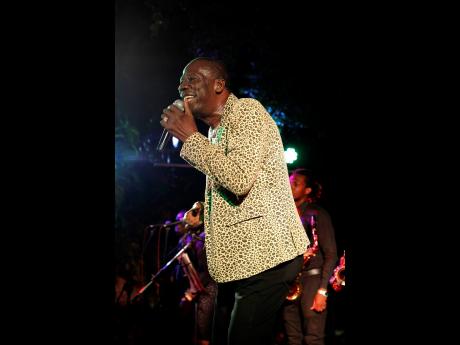 Stephanie Lyew
Always enthusiastic to share his voice, Leroy Sibbles approaches the night with a smile. 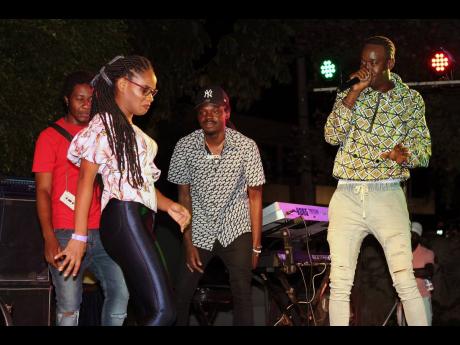 Stephanie Lyew
Chi Ching Ching entertains Antoneil Dinnall as a honorary dancer during his set at XII Musical Delights; dancers Disciple and Gabbidon cheer her on in the background. 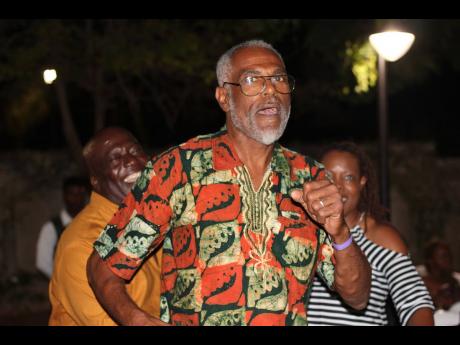 There were lyrical tributes to recording artistes ranging from the era of old-school funk and pop to R&B and reggae.

Music is all about the groove, not only the genre reminded Hewitt as she seized the microphone.

The female vocalist ruled the stage, delivering lines like a true star of such songs as 1967 pop classic To Sir With Love, Chaka Khan’s Ain’t Nobody and Simply Red’s chorus “I’ll keep holding on, I’ll keep holding on” of the 1985 hit Holding Back The Years of which she covered on her recent album. These she performed before entering into an original catalogue of powerful music like the title track, Stronger. Leroy Sibbles, like Hewitt, was successful in getting the audience to clap to the beats and sing along. Both did their renditions of Toots Hibbert’s liberated track 54-46.

For anyone, Leroy Sibbles would have been a hard act to follow but for past festival song finalist Rojah, it was easy to get those glued to their seats involved in a ‘party, fiesta, forever’ opening his set with Lionel Richie’s All Night Long. The “wildly energetic performer”, as the night’s emcee Deon Silvera said of Rojah, literally ripped through the seams of music’s diverse genres (and his tailored pants) with the pulsing, pop-and-lock routines matching the moon-walk Michael Jackson.

Still, the wardrobe malfunction did not affect his “rocking and rolling” into Bob Seger’s Like A Rock – proving that almost any track can be turned into reggae with a little effort – not before paying his respect to some of the genre’s legends, Jimmy Cliff with T he Harder They Come and Bob Marley with Could You Be Loved and Iron Lion Zion.

Speaking to The Gleaner during a brief intermission, Rojah said, “It’s actually very amusing; I am used to wearing other pants like ripped jeans but for the occasion I wanted to impress with a dressier look. In the end it was not how I presented myself that mattered, but what I presented.”

The second half of XII Musical Delights forced more persons out of their seats. Dance hall table-turners Voicemail’s Kevyn and Qraig and Chi Ching Ching sets tested the dancing skills of the audience. With more than 20 minutes on stage, Voicemail called on hits from the early 2000s such as Dance, Nuh Linga and Sweep and Wacky Dip and Chi Ching Ching followed suit with body-rockers like Rock Di World, Roast or Fry (Breadfruit) and Rope which are all part of his debut album, Turning Tables, tracklist.

Like Chi Ching Ching, who was successful in getting one female to join him and dancers, Gabbidon, Kool Kid and Disciple to show off her skills, reggae singer Errol Lee also motivated three women to step up to the stage. In his vocal salute to Bob Marley which started out with I Wanna Love You and Jammin, the role of Sharon Hastings, Sharon Wever and Tracy July were to imitate the I Three, Judy Mowatt, Rita Marley and Marcia Griffiths as he continued with Three Little Birds and One Love.

And if persons thought the show would not end on a high, the Messenjah Luciano swooped in with Sweep Over My Soul, Lord Give Me Strength and It’s Me Again Jah raising spirits to the ultimate level as he closed.

“Our concert has grown from strength to strength, becoming more enjoyable with each staging. There is a great mix of young and old entertainers, similarly for our audience, persons who have remained faithful to our brand by coming back every year,” Pauline Royal, chairman of the fundraising committee for the Lions Club of Kingston told The Gleaner of the show’s growth.

“The first show was executed in February, but it also marked the anniversary of our organisation, which was formed on February 22, 1965 (so) we are currently celebrating 55 years. I think we have created a respectable movement and look forward to securing endorsements as an event that celebrates Reggae Month,” she said.