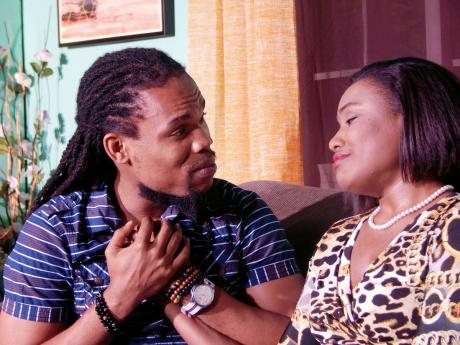 Michael Reckord
Antonio (Kadeem Wilson) is very persuasive as he woos Janet (Stephanie Hazle) in this scene from comedy-drama ‘Hell and Powder House’.

“Where does she find the time?” would be a reasonable question for you to ask before entering the Jamaica Shopping Club Theatre on Cargill Avenue to see the current play, Hell and Powder House. The question would be about Dahlia Harris, who has written, directed and produced the play, while working on a morning ­television show and an afternoon radio show. And she’s also often on stage and television in major acting roles.

But after the play, you’d ­probably be saying, “Wherever she found it, I’m glad she did. That was fun.”

Indeed it is. An unabashed soap opera, the play has a male ­character who, we quickly find out, wants to emotionally hurt and financially ruin the play’s really nice female character. A third character is the woman’s best friend, whom the man is trying to blackmail into helping to ruin the nice woman.

In addition to having the classic theme of good versus evil, Hell and Powder House has the more modern twist of smart, strong woman fighting back against wicked, strong man. There’s no prize for guessing who wins in the end, but it’s the journey that’s intriguing, not the destination.

Convincingly playing the characters in the larger-than-life style appropriate for soap opera are Kadeem Wilson (Antonio, the villain of the piece), Stephanie Hazle (Janet, the good girl) and Renae Williams (Sasha, her friend).

Lights go up on the women in Janet’s tastefully decorated apartment discussing Antonio’s imminent arrival. Janet is all excited for though she and Antonio, after meeting on Instagram, have been chatting online for a year, they will be coming face to face for the first time. In a bit of foreshadowing, which adds to the very contemporary feel of the production, Sasha teases Janet about the possibility of Antonio being a murderer.

The first scene, which is initially full of romantic suspense, takes an ominous twist in the second half when Antonio arrives. We find out that he and Sasha have a history, and neither of them is what Janet thinks them to be. The playwriting device of allowing the audience to know more than the characters is skilfully used here to create suspense, that essential aspect of drama.

And the suspense increases over the next few scenes as Antonio’s wicked intention towards Janet and why he targeted her become clearer. The empathy and sympathy we feel for Janet gets stronger as she is taken in more and more by Antonio, a good-looking man who not only has a ‘sweet mout’, but who also brings flowers.

We feel some sympathy for Sasha, too, because, though she is not entirely blameless for the situation, she does want to help her friend. But she would be risking the friendship, and perhaps her life, if she were to even tell what she knows.

While it is chock-full of heavy drama, the play is at heart a comedy. This component comes out strongly in the final scene when – without my revealing too much, for there are a couple of amusing twists – good triumphs over evil.

The acting is excellent. Though young, the performers have quite a bit of experience. Wilson, for example, was trained at the Excelsior Community College’s School of the Performing Arts and has at least a couple of movies under his belt, and even more stage plays. And before she started in commercial theatre, Hazle spent years with the Jamaica Junior Theatre.

Generally speaking, the blocking (movement on the stage) for the actors is good, but though there is just so much the director can have them do on the theatre’s tiny stage, she should find some other activity for Janet than the continual fixing of the numerous cushions on the living-room couch.

The newspaper ads indicate two shows on Saturdays, but there was no Saturday matinee last weekend, so those wanting to go on that day should check first.