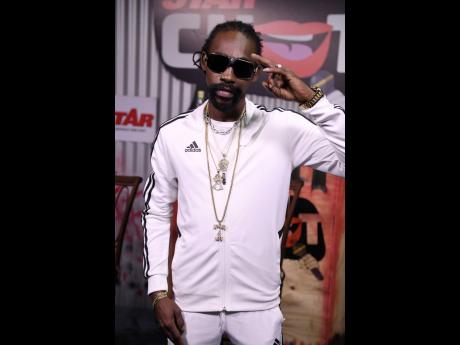 From the infectious sounds of Big Youth’s cool and confident crooning, as he eschewed new-age political correctness which dictates ‘the ‘N’ word’ for nigger’, and instead melodiously toasted, “every Nigger is a star”, to Munga Honorable’s brash and booming “bad from mi bawn,” it was proof positive that dancehall cyan stall.

That was the theme for this week’s edition of Reggae Wednesdays, the Jamaica Reggae Industry Association (JaRIA)-produced event to celebrate Reggae Month. With a larger turnout than the previous week’s, both in the audience and backstage, and a line-up that stuck to the theme, the free concert in Emancipation Park, New Kingston, was a showpiece of Jamaica’s music and dance culture

Bestowing his special, gold-teeth-capped smile that glistens and ignites his entire being, Daddy Big Youth shouted, “Right now, riddim hol’ I!” and obviously, that was responsible for his fluid movements and his entertaining gyrations on stage. Young and old alike, and this includes the tourists who had come to Jamaica for Reggae Month, connected with the veteran cultural toaster and eagerly accompanied him on a musical journey. He warned that if you “ride like lightning you will crash like thunder”, and when it was time to leave, he quickly Hit the Road Jack. But, before that, Daddy Big Youth had a message. He asked for more support for reggae music, and cautioned the artistes to protect this cultural legacy. To those who are violence creators, his exhortation was, “Stop the foolishness”.

Representing old-school dancehall was Flourgon, who seems to be in demand ever since it was announced that he won the million-dollar copyright case against Miley Cyrus. The We Run Tings deejay gave a performance that was right on the money. There was no long talking as he delivered many of the classics, or just the punchlines from the songs that made him a household name.

Munga Honorable, dressed in ripped jeans and a hoodie, was confident and commanding. He spewed lyrics that themed ‘badness’ and thrilled a section of the audience. Quite cognisant of the possible ripple effect of his words, Munga made an honourable disclaimer, “Please note that this is entertainment. As bad as these songs are, we say no to violence. Give thanks for life.”

It was a high voltage performance from song and dance machine Chi Ching Ching. Watch di Wire, Breadfruit, Callaloo and Rope all had their dance moves perfectly executed by Ching and his dancers on stage. He showed his soft side when he brought up “a little princess” from the audience, who showed her dancing skills as she watched the wire.

Jahmiel walked on and worked the stage. The Strongest Soldier singjay is not a regular on the local entertainment circuit and it was a good look for him to represent for dancehall on the Reggae Wednesdays stage.

Also representing for dancehall – with the emphasis on ‘dance’ – was the Orville Hall-led Dance Xpressions. Enough kudos and praise cannot be heaped on them for their fascinating Journey Through Dance segment. Their dramatic cultural piece explored Jamaican dance forms from the era of ska – uptown and downtown, to the present – with a refreshing dramatisation of the ‘speng’ era of the open-front shirt, mesh merino, Clarks bootie and, of course, the diamond socks and the walk to match. It was classic. They ended their segment with Koffee’s Toast and the ‘Toast’ dance, which, Hall pointed out, is really named Congrats. Orville Xpression used the platform to make a passionate appeal for the creators of the Congrats move to be given their credit, following reports that Overload Skankaz, the creators, are not being acknowledged. “We want to say congrats to everybody as we give you Toast,” he ended, as he and his dancers energised Emancipation Park yet again.

The theme for Reggae Month 2020 is ‘Come Ketch di Riddim’.