Educator examines acceptance of ‘Patwa’ over the decades 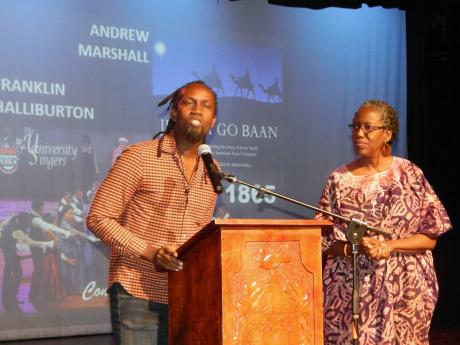 Photo by Michael Reckord
Head of the PSCCA, Michael Holgate, thanking Carolyn Allen after her talk at the centre. 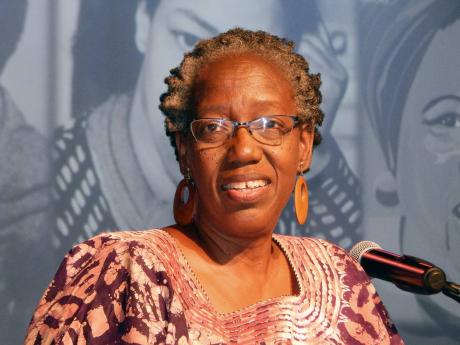 Over the last 90 years or so, Jamaican ‘patwa’has gradually become a legitimate, even respectable language. That’s the essence of the thesis argued in the 2020 Philip Sherlock Lecture by educator and theatre practitioner Carolyn Allen last Wednesday.

Given at the Philip Sherlock Centre for the Creative Arts (PSCCA), UWI, Mona, it was conceived as a response to historian and poet Edward Kamau Brathwaite’s 1984 lecture ‘History of the Voice: the Development of Nation Language in anglophone Caribbean’.

Allen grew up as a speaker of standard English, with parents who received teachers’ college education during colonial times and insisted on standard English in the home, assuming that “Patois would come naturally”. But though the language (variously called Patois, dialect, Creole, nation language, and patwa) is most Jamaicans’ mother tongue, it didn’t come naturally to Allen.

As an adult, she had to deliberately teach herself the language. Even now, she confessed, she was not entirely comfortable with it, at least not enough to give an entire lecture in it – though she did occasionally use it during her presentation.

In the lecture, titled ‘Signposts on a Journey of the Voice: Exploring the Dynamics of Language in Jamaican Literature’, she referenced several Jamaican writers – poets, playwrights and novelists – and began by noting the serendipitous literary events occurring in the last year or so.

She said: “ … What an auspicious time it has turned out to be, with the centenary of Miss Lou just last year, and the petition to consider official status for Jamaican Creole; this year is the 80th anniversary of the birth of [Trevor] Rhone and birthday of Nana Erna Brodber; a new novel by Claude McKay is to be published and, of course, just two weeks ago Brathwaite stepped up to join the ancestors”.

Explaining the parameters she gave herself for the talk, she said: “Narrowing the field to Jamaica, I want to look again at Brathwaite’s comments on McKay and Miss Lou [Louise Bennett-Coverley] and extend the field to consider prose fiction and drama, to take a single pair in each genre and do a before-and-after check, just to see if and how the dynamics of language had changed 20 to 30 years later. Are there parallels for the kinds of differences Brathwaite observed from McKay to Miss Lou and later Mikey Smith [the poets], when we compare Erna Brodber to Claude McKay [the novelists], and Trevor Rhone to Una Marson [the playwrights].”

Allen said that McKay, the forerunner of the selected writers, wrote mostly in standard English, though his mentor, Walter Jekyll, encouraged his writing of dialect poems and thought they would sell well. As late as in the Independence period, she quoted Brathwaite as pointing out, Bennett-Coverley “could not be accepted … as a poet”. Allen also noted that “even anti-colonial (and anti-Poetry League) nationalists like the editors of the early editions of Focus didn’t regard [Bennett-Coverley’s poetry] as a serious literary effort … .”

But then The Gleaner began publishing Bennett-Coverley, for the editor realised that “Patwa sells”. Still, Allen commented, for Patwa to earn regard “as a literary language would take more time and the efforts of both creatives and critics”.

Though when Marson was writing Pocomania, the use of the nation language was rare on stage, much has changed and, Allen said, “today with a very busy commercial theatre scene, the very opposite obtains”. She also noted Brathwaite’s statement about poetry: “ … since this history was first conceived and presented … there has been such a liberation of voice in Caribbean poetry, that nation language has become not the exception but almost the rule … .” She gave examples of “sound poets” Mikey Smith, Oku Onuora, Linton Kwesi Johnson as achieving “the status of pop stars, publishing their work through performance (like early Miss Lou)”.

As she wound down her lecture, Allen had this long exclamation, appropriately in Patwa: “ … all church song, opera and cantata a sing a Patwa now yu know? Yes man, all up to December gaan a Courtleigh Auditorium, Andrew Marshall cantata weh use di Bible inna Jamaikan. An couple years a back it was University Singers pon di very stage doing Franklin Halliburton 1865!”