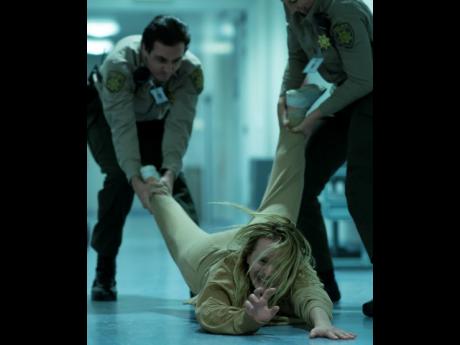 AP
Elisabeth Moss in a captivating scene from ‘The Invisible Man.’

The year 2018 saw the release of an amazing action film called Upgrade. Initially, I reviewed it as being “some of the most imaginative, fun and wildly expressive” action I’d seen in a long time. Sadly, since Upgrade there hasn’t been anything to quite scratch the itch it left behind. There have been superb action movies, no doubt, but none that makes you question the nature of the film-making itself. Thankfully, director Leigh Whannell is back once again making The Invisible Man, and has cemented himself as one of the most interesting directors working today.

From the film’s opening titles you can tell you’re in for something special. Waves crash over a seemingly empty space, only to reveal invisible text as the water trickles over it. From there, we’re introduced to a distressed damsel, Cecilia, making what is obviously a very methodical escape from an abusive relationship. It’s here that the film introduces you to one of its primary weapons of tension. Silence. With each step, Cecilia is in danger of waking her captor. You know nothing about her, but the film-making alone makes you root for her survival, and fear for her safety.

After that point, the film goes on to show a woman who is suffering from an extended period of trauma. Elisabeth Moss deserves accolades for her performance. She’s vulnerable, frightened, and at the same time, paints a picture of a person unable to shake the feeling that her freedom is not what it seems. Most people feel like their attacker is standing right behind them after they’ve survived an ordeal, only to find out there’s nothing there. Unfortunately for Cecilia something is, literally, always there.

The movie contains masterful camera and stunt work to effectively pull off the illusion of the invisible man. It’s genuinely hard to imagine there was truly nothing there. By the magic of moviemaking, the film is able to bring across a terrifying concept in such an engaging way that you refuse to look away from the horror. It’s the kind of thing great thrillers are made of, and is grounded by a spectacular performance by Moss.