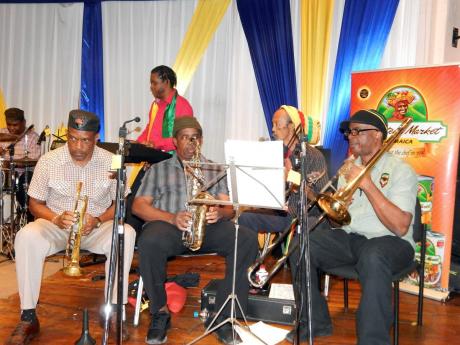 Michael Reckord
The Jamm All-Stars band playing at the IOJ after the third Grounation 2020 session. 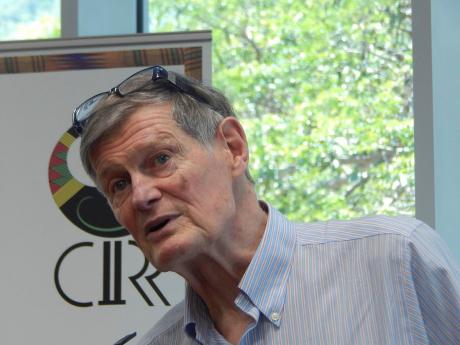 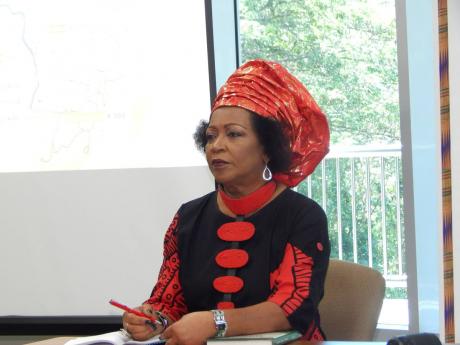 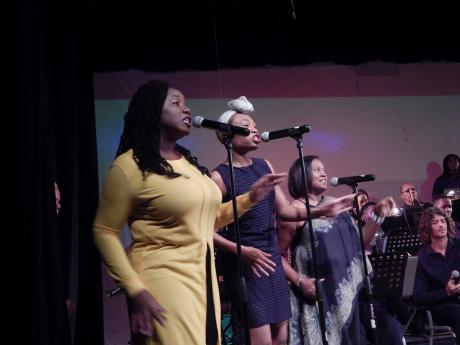 February, celebrated as Black History Month, was chock-full of directly and peripherally related events and it ended in a week with an increased flurry of cultural activities. The three functions that I was able to attend included one on the arrival of enslaved Africans in the Americas, arguably the source of the history month concept.

The event was the second annual Africa Appreciation Day and Reparation Reasoning, organised by the Centre for Reparation Research, UWI, which is headed by Professor Verene Shepherd. It was held on February 27 at The University of the West Indies Regional Headquarters, Hermitage Road.

The entertainment-educational event was designed to benefit educators, students, and the general public. Of special interest to the members of the first two groups involved with history at the CSEC and CAPE levels was the lecture delivered by David Eltis, the Robert W. Woodruff Professor Emeritus of history at Emory University.

The co-editor of the Transatlantic Slave Trade Database (at www.slavevoyages.org), he is also the principal investigator of a two-year project which draws on the records of 67,000 names and descriptions of Africans liberated from slave vessels in the first half of the 21st century. British-born Eltis is a prolific essayist and the prize-winning author of Economic Growth and the Ending of the Transatlantic Slave Trade, and The Rise of African Slavery in the Americas.

Eltis said that the data available about slavery in Jamaica is probably the best available for any slave society in history. He showed a slide stating “ … we know how 95 per cent of Africans arrived in Jamaica and for the most part where they came from. [Between 1607 and 1857, some 1,019,600 enslaved Africans were brought to the island in 31,000 vessels making some 36,000 voyages.]

“We know about most departures from the island and where they went. Because of the slave registration data, we have information on all captives living on the island close to the time that the slave population was at its maximum. We know who most of the plantation owners were, but we have even more information on the identity of slave ship owners.”

At the third Grounation presentation on March 23 at the Institute of Jamaica (IOJ) auditorium, we heard the inspiring story of Randy’s & VP Records and the Chin family, the owners. Businessman Wayne Chen moderated the discussion by a panel which was largely dominated by Patricia Chin, the matriarch of the family.

She has been 60 years in the business. Other panellists were her sons, Chris and Clive, and musicologist Clyde McKenzie.

Chin said that the business began in 1959 after her husband, while going about his job of changing records in jukeboxes, realised how much music meant to Jamaicans. Clive spoke of his early entry into the business: in the afternoon after school he would go to 17 North Parade to the record shop and learn from his mother and father.

His mother “had an ear” for the tunes that were going to be hits, he told the audience. The two spoke of working in the early days with some of the great names in Jamaican music – Agustus Pablo, Dennis Brown, Alton Ellis, and Carl Malcolm, among others.

Picking up the tale, Chris spoke of being born the year the business started, migrating in 1977 with his parents to the USA (specifically to Jamaica, Queens, in New York City) and beginning to work for the company in 1979.

Chen said that in his travels around the world, he observed that VP Records played a vital role in the distribution of reggae music records internationally. He felt great pride about the huge VP Records sign installed in the Chinese-American Museum in New York, he said.

McKenzie praised the company for the financial assistance it often gave to the artistes whose records they produced, and for allowing them to “be themselves” and create music that had an authentic Jamaican feel. That was unlike some American record companies the artistes were signed to which tried to rework the sound to make it “radio-friendly”. This alienated the artistes and their audiences, he said.

I dashed from the IOJ to attend the Faculty and Friends concert at the Edna Manley College’s School of Music. The Vera Moody Concert Hall was full, showing that audiences look forward to the faculty concerts – with good reason. They are professionally produced and feature some of Jamaica’s best musicians and singers.

The last concert, in November, was a scintillating, unforgettable tribute to Broadway musicals. This concert was more eclectic in its selection and had a focus on medleys. They included a New Edition medley of songs from the 1980s and a Dennis Brown medley, conducted and arranged by ‘Ibo’ Cooper and featuring songs like Our Day Will Come, One Hundred Ways and Wichita Lineman.

The Marcia Griffiths medley featured crowd-pleasing singers like June Lawson, Trevelle Clarke-Whyne and Jillian Castle, and hits like My Dreamland, I Want to be Closer, Love Sweet Love, and Bob Andy’s Fire Burning. The concert ended with Clarke-Whyne singing Electric Boogie and many in the audience dancing happily.