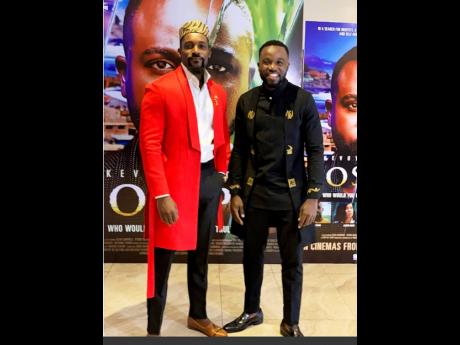 Contributed
Ghanaian actor and TV presenter Mawuli Gavor (left) and Jamaican actor Kevoy Burton in Nigeria at the premiere screening of their film, ‘Joseph’, co-written and directed by Marica Weekes.

Movies deal with several ideas, but more often than not, chief among them is identity. In films, identities are several, and expose us to a wide variety of peoples. Our favourite movies often have characters we can relate to, in situations we find familiar, or, sometimes, a character can give us an insight into a personality completely unlike our own. Whatever the reason, the most compelling thing to watch an identity do is change. Either to see a character achieve a destiny they were always meant for, or to shift entirely from who they thought they were.

In Joseph, identity is the name of the game. The titular character has so many sources by which to manifest an identity, he might as well not have any. Yet it’s all of those directions that will eventually lead him to be who he’s meant to. Like anancy being pulled in different directions by the various cooks of the jungle, Joseph’s destiny is formed by the very pressuring environment from which he seeks to escape.

When the film starts, his best friend is a recent victim of a car accident. His friend is from Ghana and frequently would incite Joseph to visit for the sake of honouring his tribal roots. Direction 1. His father is a business owner wishing for Joseph to take up his mantle. Direction 2. His mother wants for him to marry a good girl like his childhood sweetheart. Direction 3. His sister tells him to not take life so seriously and that his path doesn’t matter in the grand scheme of things. Direction 4. His late grandfather praised alternative medicine and sanctified remembering one’s history, instead of obsessing with the now.

Joseph, of course, must also decide what it is he wants to do. This deliberation makes up most of Kevoy Burton’s performance, yet he never seems as conflicted as the film would lead us to believe. There’s not so much a moment of doubt, as there is a constant determination to defy everyone. Combine that with the fact that each of the issues facing Joseph coalesce to be individually lacking, the film is rendered to be filled with good ideas, without proper execution on them. The movie could do well with less so the audience can at least see Joseph process it all.