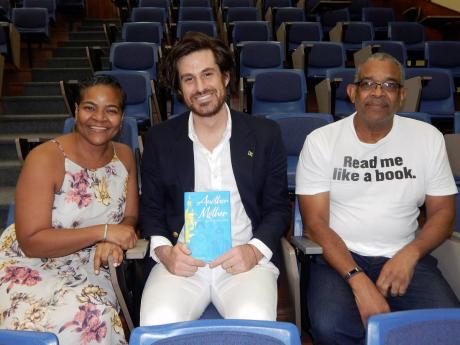 In a book that soars with poetry, American author and journalist Ross Kenneth Urken metaphorically describes his Jamaican nanny’s past as being “a fortified city”. But it was one he felt compelled to explore.

This I learned when he and I chatted before he left the island two weeks ago. He had come here for readings, workshops, and the official launch of the book Another Mother, about his nanny, Desna, at Red Bones Café.

He said, ”Something I‘ve come to realise in the creation of this book is that I am a product of Desna’s rearing, and in order to understand myself, I had to understand her origins.” (Desna, who migrated to the United States “for a better life”, was his nanny from he was 18 months old until he turned 13 and had his bar mitzvah.)

So he conducted research in his home state, New Jersey, where six of Desna’s children live, and, primarily, in St Elizabeth, where she grew up. The result is a work that is both a memoir and a tribute to Desna.

Urken, whose articles have appeared in The Washington Post, The Wall Street Journal, and The Guardian, among other papers, attributes his love of reading and writing, his love for language, generally, and his desire to become a journalist to Desna’s tutelage. “We’d read and write together,” he said, admitting that he initially resisted her efforts.

“She had an indelible imprint on my life,” Urken continued. “She was there amid some of the turmoil my family experienced … . My parents divorced, remarried, and divorced again … . She was able to calm their antagonism, and she brought some order with her Jamaican sensibility to the entire family, especially to me, the youngest. I relied on her.”

Asked what he perceived to be the “Jamaican sensibility”, Urken explained that while he was wary of generalising, he found that Jamaicans, on the whole, were “a soulful, heartfelt people”. He said, “There is this sincerity and deepness that expands across the population.”

He came to Jamaica after Desna died at 69, he said, and connecting with her family allowed him to recognise the traits in her that are in Jamaica, generally. “There’s a Jewish tendency to anxiety in the New York area and in my family,” he said. “Though she dealt with challenges in her own life, Desna was able to maintain a calmness and equipoise that has stuck with me. I try to bring a ‘Desna zen’ to my life every day.”

He heard many of Desna’s aphorisms and noticed many of her mannerisms and facial expressions in her children, he said, but learnt more about her from going to St Elizabeth and seeing the places she walked and houses she grew up in.

Urken said the book has been reviewed “generously” in The LA Review of Books, Newsweek, Newsday, and the wider Caribbean. It resonates widely, he said, because while a book about nannies is “something of an oddity”, children having nannies is actually “a common phenomenon”. Additionally, the topic of migration, “especially to the US under this (Trump) administration, has been top of the news”.

Urken and I spoke in the company of two principals of Ian Randle Publishers, the publishing house for Another Mother, Chairman Ian Randle and Managing Director Christine Randle. The latter said, “Ross wanted to write this as a memoir and tribute to Desna, but it’s not just for Desna. The community of nannies in North America and farther afield have welcomed this book and taken it as their story. That’s something special.”

Nodding in agreement, Urken chuckled as he told us of being invited to one of the nanny balls now held every year in New York City. He added, “You may not get a degree in this work, but it’s meaningful. People reach out to me on social media to say thank you (for the book). It helps people feel recognised …, and I hope it encourages them to write their own stories.”