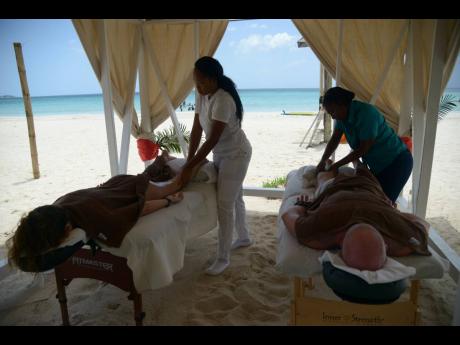 File
Patrons attending the Tmrw.Tday Culture Festival in Negril in 2017.

FESTIVALS ACROSS the world have been postponed or cancelled, but Tmrw.Tday Culture Festival has decided on a third option – to take it all online. Instead of flocking to Seven Mile Beach, Negril, for a weekend of yoga, green eats, reggae, dub and house music, and a wide circle of calm, kindred spirits, the organisers will virtually present Tmrw.Tday Together.

“This is the first that I know of in this space. I know people are doing different things, but we’re excited. We’re taking the plunge. We’ve got a solid team and solid core following,” festival organiser Kevin Bourke told The Gleaner.

Tmrw.Tday Culture Festival was originally scheduled to take place from April 28 to May 3. With every effort to maintain a similar timetable, the virtual version is expected to launch sometime later this month. Shifting Tmrw.Tday’s venue from Negril to the Internet has affected the timetable in other ways, extending the original six days of ‘festi-vacation’ into 11 days, and so will incorporate two weekends.

“It’s basically, as much as we can, transferring the elements of the festival to online. It’s a platform that we have researched and purchased,” Bourke said. “There will be yoga and fitness classes, ‘Tribe talks’, sound healing and all the other experiences Tmrw.Tday offers. Almost all of the practitioners, the yogis and healers, have agreed to populate the platform. It’s looking really good for what the content is going to be,” he added.

There will be some live aspects to Tmrw.Tday’s virtual execution, where patrons can log on and participate in the classes. The live sessions will also be captured for virtual patrons to access at their own leisure. And, of course, there will also be music. “We have some international house acts on board already that are gonna do sets. We’re talking with Jesse Royal and Romain Virgo, who were part of the show, to get that music content on there,” Bourke said.

As the terror of COVID-19 takes its turn around the world, Bourke, alongside managing partners Andrew and Stacy Christoforou, assessed and decided it was best to innovate for the sake of their patrons, and those whose financial plans were inadvertently thwarted. “There were people who were depending on it, from the production crew to our team of volunteers. A lot of people are in some rough places,” he said. In response, 50 per cent of the festival’s proceeds will go to members of the Tmrw.Tday team, who have been financially affected by the COVID-19 pandemic.

He noted the festival’s original intent to inspire its patrons, and assist them along their holistic and spiritual-awakening journeys. “The fact is, we have an obligation to the people that come to the festival. People were excited, and we believe we can deliver that same content and vibe through a virtual festival – and still accomplish what we were seeking. It was the right thing to do,” he said.