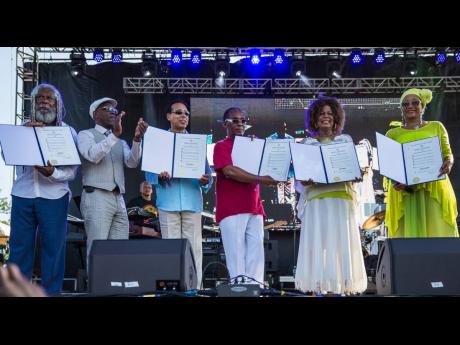 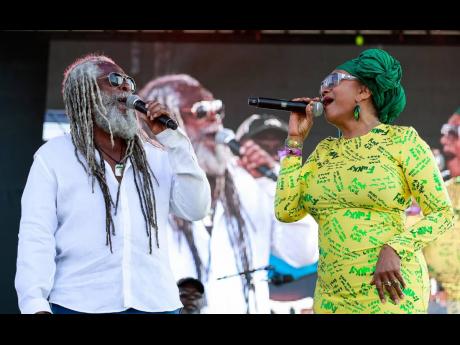 ON SUNDAY, June 29, 2014, Reggae Queen Marcia Griffiths was celebrating 50 years in the music business and she had brought along a powerful army of veterans from Jamaica to help her mark this musical milestone at Groovin In The Park 2014. Among her friends were Judy Mowatt, Ken Boothe, who had replaced an ailing John Holt at the time, Tony Gregory, Lady G, and singer-songwriter Bob Andy.

The iconic Andy had toured the world many times with Griffiths, performing at major festivals and concerts all over Europe, Japan, South America and Canada, but this was his very first performance at an outdoor concert in New York state and he was feeling good.

“I am excited to perform for my fans in New York,” Andy told Groovin Radio host Clement ‘Ras Clem’ Hume during an interview on WVIP, 93.5 FM a few weeks prior to the festival.

The day of the event was a picture-perfect summer day in Queens, New York, and thousands of music lovers had taken up early positions at the Roy Wilkins Park. Completing the impressive line-up were LUST; Chronixx, reggae luminary Beres Hammond, and Australian pop duo Air Supply. Bob Andy, who was dressed in blue slacks, a long-sleeved white shirt and dark shades, commanded the stage from his first note, belting out Studio One hits Too Experienced and My Time. He was later joined by his lifelong friend Marcia, and the two pounded the park with their chart-topping sing-along hit songs Always Together and Young Gifted & Black. Andy’s and Marcia’s musical journey dated back to the 1960s. The duo, known as Bob and Marcia, initially recorded for Studio One and later for producer Harry J. Young Gifted & Black, a Nina Simone cover which was recorded for Studio One, ended up at number five on the UK singles chart and sold half a million copies in the UK and Europe.

Back on stage in New York, Andy had found a groove and fans were loving his performance with the 809 Band. Reggae historian and tour manager Copeland Forbes was charged weeks earlier with the responsibility to organise for the original 809 Band from Jamaica, with Mikey Fletcher on bass, drummer Paul Kastick, Christopher Birch on keyboards, Leebert ‘Gibby’ Morrison, Winston ‘Boo Pee’ Bowen on guitar, Dean Fraser on saxophone, Ronald ‘Nambo’ Robinson, and Junior ‘Chico’ Chin on trumpet to back the veterans. And what a musical treat it was!

“This show is simply amazing,” Yvette Clarke, US congresswoman from Brooklyn, said during the concert. Clarke had come out with her mom, Dr Una Clarke, to enjoy the Sunday concert, and to bring New York congressional proclamations for several of the veteran artistes, including Bob Andy.

Born Keith Anderson, Bob’s contribution to the reggae genre spans more than half a century. In the 1960s, he joined the legendary Paragons, which he co-founded with Tyrone Evans and Howard Barrett. He later emerged as a solo star with the smash hit I’ve Got to Go Back Home that was released in 1966. Among his other accomplishments were the release of albums Bob Andy’s Song Book (1970) and his Lots of Love and I (1977) – with singles Unchained, Ghetto Stays in the Mind and Feel the Feeling. Andy’s success did not go unnoticed as he was honoured by Rockers Magazine in 1989 with a Lifetime Achievement Award. Two years later, the Canadian Reggae Music Awards in Toronto honoured him as well. He was named a ‘Living Legend’ at the Reggae/Soca Awards in Miami in 1997, and was the recipient of the Prime Minister’s Award for Excellence in Jamaica in 2003. In 2006, he was conferred with the Order of Distinction by the Government of Jamaica

Despite his 2014 performance, Andy’s wish was to one day perform at Groovin In The Park as a solo artiste.

“Just remember this, I have yet to play Groovin In The Park,” Andy told Hume when the two ran into each other at Rebel Salute in 2018.

Unfortunately, that wish was never fulfilled as the ailing singer passed away on Friday, March 27, at his Stony Hill, St Andrew home. He was 76.