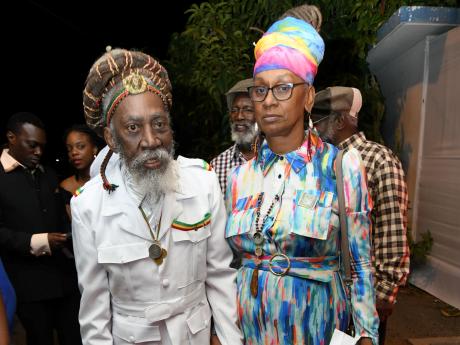 A 30-minute mini documentary will be released today in celebration of the birthday of Neville O’Riley Livingstone, the last man standing of the original Wailers group, which also comprised Bob Marley and Peter Tosh. Bunny Wailer, a three-time Grammy winner, is upbeat about marking his 73rd year on planet Earth. For this earthstrong, Jah B, who is still on the mend following a stroke in 2018, tells The Gleaner that he is giving thanks and praise as he continues his “Solomonic trod” on Earth.

“I am called Fitty Fitty by my brethren from those times, and it’s serving I well in these times. Giving thanks and praise to Jah Rastafari for all that He has given, still giving and doing for I, being a survivor with my key brethren Bob and Peter having transitioned so long ago. But I and I faith and foundation as The Wailers keeps I man collective and collected,” Bunny Wailer said. “I man sending strong wishes to my family, fans and especially the underserved in these trying times. Hold the faith,” he urged.

Last year, there was a party to commemorate the occasion, but with the COVID-19 restrictions, any such festivity will have to remain a mere thought for now. However, Bunny Wailer and his team, for some time, have been focusing on highlighting the legacy of The Wailers as a group and Bunny as a solo artiste. A Wailers statue, which has already been commissioned, and the mini documentary form part of the legacy project.

Andrew Livingstone of the company Live High, has been drafted in by the project managers to help in the actualisation of this vision. “This (documentary) will serve as the official launch of the Bunny Wailer archives where we’ll be showcasing a range of classic, unreleased, archived content, including live performances, interviews and other things. Blvk H3ro is actually the one who made the connection between my team and Maxine Stowe, who expressed an interest in developing a legacy initiative for Jah B and the original story of The Wailers. Our visions aligned and we pretty much hit it off immediately, and we’ve been collaborating ever since to develop strategies and content to bring this initiative and its components to life,” Livingstone said.

He explained that, ultimately, the aim is to take both what is known and what is unknown about Bunny Wailer’s legacy and that of the original Wailers, and repackage all of it to create a modern platform on which future creative, cultural brands, artistes, musicians, and events can develop and reach the global audience that’s been curated over the years through Jah B’s works.

Livingstone further outlined, “Currently, the main outlets are The Wailers Trio, which is a tribute band featuring Jah B’s son Adadenaki, BlvK H3ro and Written. Outside of that, we’re also working on supplementary pieces like apparel and merchandise and more performance-related content, as we have to also adapt to the new conditions caused by COVID-19.  We also have plans for event experiences, but we’re looking at innovative ways to adapt those experiences to the digital space.”

Born on April 10, 1947, Bunny Wailer, remains one of reggae's most reclusive artistes, fuelled by what folklore said was his dislike of  travelling on an "iron bird" (plane). His debut solo album Blackheart Man, originally released on September 8, 1976, in Jamaica on his own Solomonic Records and internationally on Island Records, remains one of reggae's most critically acclaimed works.

The Order of Merit, Jamaica's fourth highest honour, was awarded to Bunny Wailer by the Government in 2017.