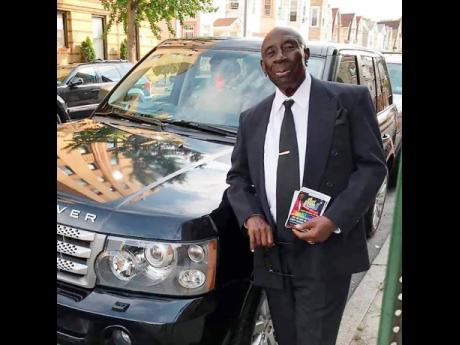 Gil Bailey, a giant in the field of broadcasting, passed away on Monday in New York, leaving a void which many acknowledge will be hard to fill. Tributes have been pouring in for the pioneer who proudly wore the well-deserved title, Godfather, and whose journey with the Gil Bailey Show saw him amassing thousands of fans and well-wishers, along with numerous accolades. One of the more poignant tributes come from his grandson, Korey Faulks, who made his post public on Bailey’s Facebook page.

“Shortly after midnight, my mom lost her father. It hurts that she wasn’t able to be by his side while he passed away, due to he contracted COVID-19 and had been isolated. When this virus all started, never thought this would impact my family the way it has,” he said. Faulks praised his mother for the love and care she lavished on his grandfather, especially in the last three years since Bailey’s wife, Pat, passed away, and his kidneys were failing him.

He continued: “Amazing how he came from a tiny island named Jamaica and landed in NYC and went on a 50-year run on the radio, deeming him the ‘Godfather of Caribbean Radio’. I didn’t get to grow up with him, but have been always inspired by his relentless hustling habits, his notoriety and his longevity. I’m sorry I couldn’t say goodbye, but I’m happy that God decided to take you home and wash your pain away,” the son of Gil’s daughter, Jacqueline Bailey-Faulks, said.

Atlanta-based founder of the Peace And Love Academic Scholarship (PALAS), Rula Brown, told The Gleaner that he interviewed the 84-year-old Bailey just three weeks ago on his Internet radio, Rula Brown Network. Bailey, he said, asked him for assistance with getting exposure on Facebook and YouTube, two platforms which he was testing out. “I met him in 1986 and immediately, the impression is that Gil Bailey is quite gregarious. Gil is a hard worker and one of the first persons playing reggae music to the Caribbean community. I knew his wife Pat. She used to live two houses from where I used to live in east Kingston. It is a sad loss to see Gil Bailey go,” Brown said.

Pat Chin, co-founder of VP Records, told The Gleaner: “I was introduced to Gil Bailey when I came to New York 40 years ago and he was one of the only ones who was forward-thinking about the music and culture. I want to wish the family my condolences on behalf of VP Records. While we lost a great pioneer in the music, he has left us a legacy on how to run a business with expertise, love and passion.”

Reggae singer Mikey Jarrett shared with The Gleaner that he was fortunate to be one of the persons who helped out Gil Bailey when he was getting started back in the day. “I have been here since the ‘70s when Gil started out at WHBI in Manhattan up by Riverside Drive, then to WNWK, and I used to help get the artistes for him to interview. Back in the day, everybody said Gil Bailey never sound like a radio personality because he was just down to earth with his natural talking. Gil said he was the president of reggae music and do him ting. Is a man who help me, and made a lot of people hear bout Mikey Jarret even before I did the big song, Mackdaddy,” Jarrett said.

For industry player Maxine Stowe, Gil Bailey was a staple of the Jamaican diaspora’s influence on music in New York. “I could say I grew up with him, from being a Caribbean student advocate in the mid-’70s to my starting Coxsone Music City in Brooklyn with Mr Dodd/Studio One, where my professional music business with him in media started in 1979. Through my active music career of three decades in the industry there, I am an experienced witness to all the accolades that are pouring in about him, and fondly remember him and his wife Pat as a power couple. Condolences to his family,” Stowe said.

Broadcaster Francine Chin told The Gleaner that she cried her eyes out for a man who regarded her as a daughter. “Gil Bailey appealed to the masses. I came here in 1987 and is Gil Bailey we used to listen to. Gilly was so funny,” she said, laughing as she recounted a few humorous moments. “We have to give people like Gil a lot of respect. They are coming from a place where people used look down in them, call them coconut and banana music, but they persevered. To Gil I say, you played a great inning and I’m so very happy that I was able to spend a few days with you near the end of last year. You were a friend and my bona fide brethren. Rest in eternal power, Gilbert Bailey, Mr. B as I called you. You will be missed. Thank you.”

Gil Bailey celebrated 50 years on air in 2019 and on August 11, organisers of the Merritone Family Fun Day recognised his contribution with a Golden Mic award at Heckscher Park in Long Island, New York. His wife, Pat, was recognised posthumously.