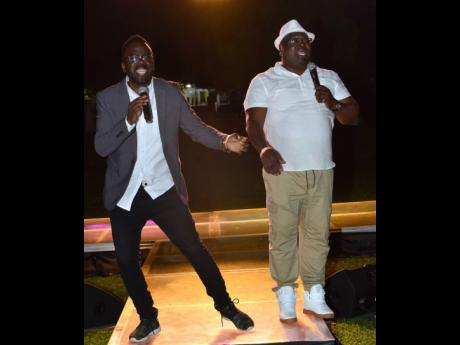 Widely considered the ‘kings of comedy’ in Jamaica, Ity and Fancy Cat have been serving up laughter to audiences for years. Their comedy series, The Ity and Fancy Cat Show, ended in 2017 but the duo continued to deliver high-quality entertainment through a new series, dubbed Bigger Boss. With production on the second season of that show having been halted due to the coronavirus, the two have now turned their attention elsewhere. In order to keep the laughter going, the pair has decided to launch a 10-week online comedy series – Laugh Online. Starting this Saturday, the duo will be taking their infamous sketches and undeniable stand-up talent to the virtual space as they seek to bring Jamaicans some much-needed comedic relief amid the COVID-19 crisis.

In an interview with The Gleaner, Ity said, initially, the pair was hesitant to venture into the online world but with requests to deliver belly-busting laughter mounting, they decided it was time to give in to those demands.

“Personally, I have been getting a lot of requests on my social media platforms to do something, and with things not expected to improve anytime soon, as far as public gatherings go, we decided it was time. We have to accept that the space is changing and so we all have to innovate and find ways to put on our shows. The way to do that now is online, there’s no getting around that, and so here we are ready to start our show,” he said. “But the main thing that made us want to do this is we realise that the entertainment we provide is a stress reliever. I don’t need empirical data to confirm this because it is a fact that people are highly stressed in this time. They are fearful, financially strained and they just want an escape. We want to provide that escape, that medicine in our unique style.”

Having been mulling over ideas prior to setting the start date for the series, Ity says there is so much in store, viewers will not be short-changed. He expressed that while coronavirus has taken so much from people across the globe, it has also left persons in his profession with a lot to talk about. He says he and partner in crime, Fancy Cat, are looking forward to putting a comedic spin on various topics.

“I’ve been putting out teasers about going live and people can’t wait. More people have been online and spending more time and so we’re going to where the demand is to deliver. We will be going live at 3 p.m., and every week you can expect to see someone different. People like Rozah Rose, Dufton Shepherd, Cathy Grant, Boasy Boy Floyd, Leighton Smith, Blakka Ellis, and all the usual players. It really is going to be something special.”