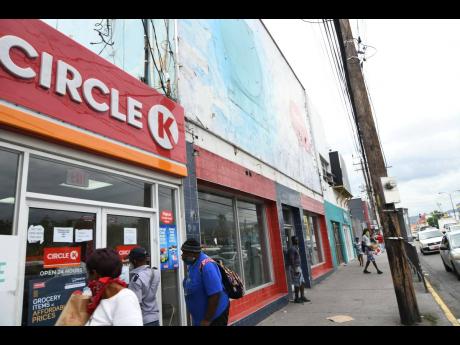 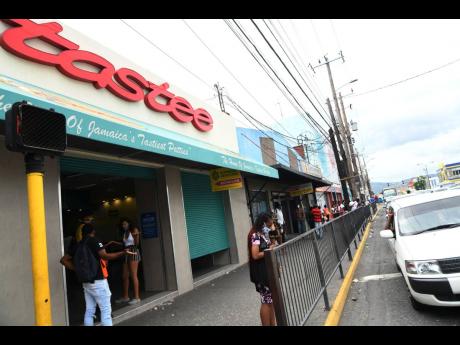 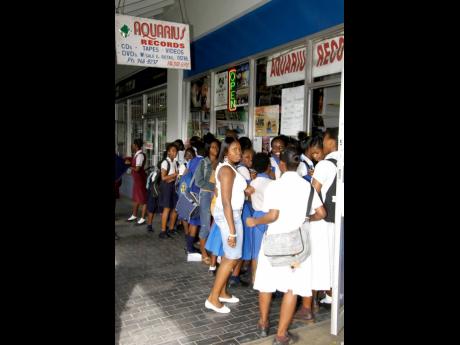 File
File A crowd gathers outside the Aquarius record store in Half-Way Tree, St Andrew, which had moved to York Plaza, for an autograph signing session.
1
2
3

Long before there was Spotify and iTunes, youngsters in Kingston got their new music right in the middle of Half-Way Tree, outside a record store called Aquarius. This music hub was an iconic landmark in the 1970s at the bus stop on Constant Spring Road, near South Odeon Avenue, just around the corner from the old Jamaica Broadcasting Corporation (JBC). It was a small store with a counter to the left and one to the right, and speaker boxes were placed outside the store so that the hundreds of students and passers-by could be hypnotised by the latest hits. The store shared the block across from the park with KG’s, an appliance and electronics store; Skateland, a skating rink; and Miami Store, a high-end clothing outlet. Hundreds of pieces of music were sold there every day – seven-inch ­singles, vinyl albums, cassettes and the long-departed eight-track tapes.

The bus stop outside Aquarius was the old ­transportation hub for most points of the city going north to Havendale, Meadowbrook, Red Hills, Constant Spring, Allerdyce Gardens, Aylsham and Stony Hill. At that time, traffic flowed in both directions on Constant Spring Road. Some of those who stopped by for the afternoon party did not utilise that bus stop, and came from faraway points across Kingston and St Andrew. The Barbican, Molynes, Mona Heights, Hope Pastures, Papine, Hagley Park and Mountain View kids stopped by too, to soak up the music before moving to their respective bus stops, to get the number 14, 27, 13, 70, and 72 buses. All would congregate outside the store, ignoring their departing buses just so they could listen to the latest reggae, R&B and even rock songs coming from Aquarius. Lunch money for the next day was often splurged on singles for 75 cents, or an album for J$3.50. The weekly RJR four-page pocket chart that listed the ­hottest songs and radio personalities like Marie Garth was free on the countertop. Those who had extra cash could grab a frozen coke or a cotton candy at the nearby York Pharmacy.

Aquarius was owned by Kingston residents Lloyd and Daphne Chin-Loy. The store’s ­tremendously successful hype man was a slender, welcoming and astute audiophile who was known to everyone as Herman Chin-Loy. He had the ability to turn the Half-Way Tree bus stop into a teenage dance party, and he would break new songs right there at the bus stop long before they made the playlists at JBC and RJR, Jamaica’s two radio stations back then. Hot pre-releases were strategically leaked to premium shows like the ‘Six O’ Clock Experience’ on JBC FM, or to sound systems like Ecology Force, Mellow Canary, Sanatone, Gemini, Wild Bunch and Soul Shack, long before they made their way to the general market. At the store, Chin-Loy was a showboat who would skilfully flip records from sleeve to turntable, and back to sleeve again before startled onlookers could blink twice.

“Herman was the go-to man for hard-to-find records on obscure labels for sound systems in the 1970s, records like What About Me by First Class and Woman of the Ghetto by Marlena Shaw,” Hugh ‘Baby U’ Cole, a seasoned selector from Ecology Force and DJ at Club Tropic and Exodus, both former nightclubs in Kingston, told The Sunday Gleaner. Returning residents visiting Kingston from overseas would replenish their supply of reggae hits at the store, guided by the wisdom of Chin-Loy, and local music lovers from all over the island visited the outlet as well.

“I travelled from Malvern in St Elizabeth just to buy records there, and then I’d go back home on the country bus,” Howard Hendricks, a music lover and radio jock, recently posted on a social media page in reference to Aquarius. Reggae hitmaker and former fashion model Sheila Hylton also recalls her visits to the store. “Herman Chin-Loy was always on top of his game, and I would walk out at times with five or six albums that he introduced to me,” she reminisced.

South Florida-based entertainment attorney Lloyd Stanbury also journeyed back down memory lane. “There were students from almost every high school gathered at Aquarius, but some were not there for the music but to be seen, and to see which member of the opposite sex they could meet.”

While it was cool for schoolboys to park at Aquarius and browse the music for hours, schoolgirls were not expected to be seen in record stores in uniform, as it was considered unladylike. So the girls mostly enjoyed the music from a safe distance, not wanting to risk the fury of a passing principal from one of the many nearby schools. Musicians, actors and dancers would pass through the store, too, and a visit there was a necessary first stop for creative talent heading to JBC for a recording session of the very popular TV dance party, ‘ Where It’s At’. The Saturday-evening show was the Jamaican answer to the American ‘Soul Train’. Aquarius would provide the pre-studio vibe, and for ease and convenience, dancers could grab a pair of patent leather platform shoes, bell-bottom pants, Afro Sheen, or a red-and-green Afro pick at Miami Store next door, before heading to the JBC security gate a few steps away.

Aquarius also housed one of Kingston’s important recording studios on the same premises, behind the record store. Back then, it was said to be the most modern recording studio in the city, built by Rosser Electronics from Swansea, United Kingdom. The Chin-Loys and their relative Leslie Kong (who owned Beverley’s Records) recorded many prominent musicians. Beres Hammond’s first album with the smash singles One Step Ahead and Got to Get Away was produced at Aquarius. A galaxy of reggae stars regularly visited, including Dennis Brown, Alton Ellis, Augustus Pablo, Bruce Ruffin and movie star Carl Bradshaw. International reggae icon Peter Tosh would stop by, too. Reggae tour manager and archivist Copeland Forbes told The Sunday Gleaner that it was outside Aquarius, while smoking a spliff one day in 1978, that Peter Tosh had the infamous altercation with two plainclothes policemen. “It quickly escalated and moved to the Half-Way Tree Police Station, where Tosh was mercilessly beaten and arrested,” Forbes said.

Those who used Aquarius many years ago still cherish fond memories of the store, of the Chin-Loy family, the studio and the music they bought there. The inventory of vinyl was by no means limited to reggae. Fans boast that they still carefully guard their album purchases – ranging from Jesus Christ Superstar to Crosby, Stills, Nash & Young, Beatles, Elton John, David Bowie, Manhattans, Chi-Lites, Roberta Flack, Tavares, Spinners, O’Jays, Al Green, and Earth, Wind & Fire.

And it’s a good thing many collectors kept their albums, for vinyl records and turntables are making a furious resurgence to the marketplace, and to living rooms across the globe. A new generation of music fans are savouring the pleasure of surgically opening the plastic wrap of a new album, inhaling its virginal aroma, slowly undressing it from the sleeve with clean fingertips and absorbing the poetry of the liner notes. Then finally, the explosion of unrestrained joy, placing the needle on the record and listening to the first few notes of a lead single on a Technics, an old German Grundig, a Telefunken, a Garrard, or any other record changer or turntable.