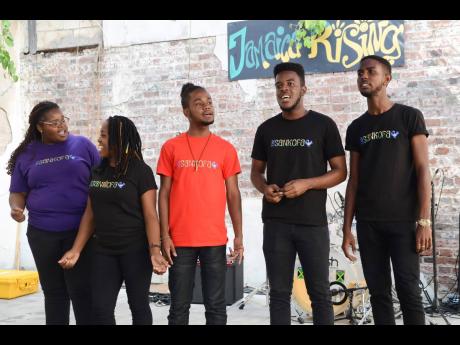 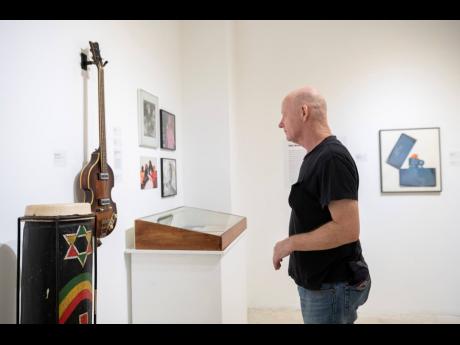 File
Mike Barker, a tourist from New Zealand, takes a closer look at a piece in the Jamaica Jamaica! exhibition at the National Gallery of Jamaica.
1
2

This weekend, the National Gallery of Jamaica will for the first time present its Last Sundays programme virtually on its YouTube channel and Instagram Account. It will feature Tribe Sankofa and the ongoing exhibition Jamaica Jamaica! available online at 1:30 p.m.

Titled after the eponymous 1985 hit song by Brigadier Jerry, Jamaica Jamaica! examines how the tiny Caribbean island of Jamaica has become an extraordinary force in the world heritage and history of music. The exhibition brings together rare memorabilia, photographs, visual art, audio recordings and footage unearthed from Jamaica?s best museums and most elusive collectors and studios, while collaborating with legendary local visual artists to convey the essence of a true Jamaican music experience.

In observance of Reggae Month, the exhibition - Jamaica Jamaica: How Jamaican Music Conquered the World - was launched on February 2 and closes on June 28. Originally launched at the Philharmonie de Paris in 2017, it also explores the beginnings of Jamaican music and how genres like kumina, revival, mento, ska, rocksteady, reggae, dub and dancehall developed into international phenomena.

According to the gallery, this virtual presentation revisits the vibrancy of the opening event during Reggae Month.

Tribe Sankofa, an award-winning performing arts collective formed by Fabian Thomas, has been an audience favourite at Last Sundays over the last few years. A vibrant and eclectic group of multitalented performers, they have combined their artistry to add an exciting new dimension to the performing arts landscape, both locally and internationally.

Their niche is - borrowed and original spoken word/poetry, soulful song-styling uniquely blended with other visual and performing arts -. Tribe Sankofa has shared their unique offerings in diverse spaces, including the Lignum Vitae Awards, Gungo Walk Alternative Music and Arts Festival, Arts in the Park and the Investiture of the Poet Laureate of Jamaica, to name a few.

For their virtual Last Sunday's performances, they will be presenting pieces inspired by themes and personalities present in the Jamaica Jamaica! exhibition.