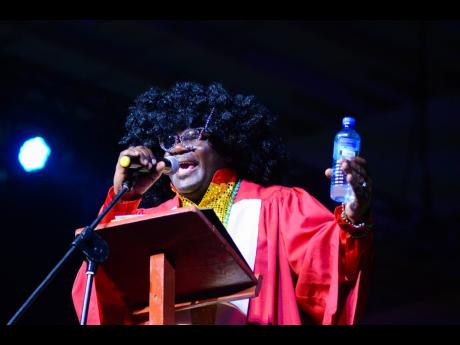 Can you imagine the very proper Roman Catholic Archbishop Kenneth Richards and legal luminary Ian Wilkinson, QC, facing off in a deejay clash? That’s what the organisers of the annual concert, Powerful Women and Men Perform for Charity, had in store for patrons come June. That clash, they say, would perhaps be just as epic as the recently staged Instagram Live Beenie Verzuz Bounty. However, whether the concert is still on the cards for 2020 is still being pondered, and a final decision will be made shortly.

“We have not yet decided whether later in the year is practicable. We are watching the situation and will decide by July. It will be dependent on several variables – the degree to which the pandemic recedes, physical-distancing rules, support of sponsors, and availability of cast,” Chairman of the Planning Committee Cordel Green told The Gleaner. “There was a thought about a digital version, but as the primary objective is to raise substantial funds for Mustard Seed, there is uncertainty whether that model would yield the level of income to make it worth the effort,” he added.

The Powerful Women and Men series, which sees professionals from all walks of life embracing, for one night only, a larger-than-life alter ego, which transcends into showmanship par excellence, has become a highly anticipated concert on the annual events calendar. This year would have marked a milestone 20th staging, and, as expected, the plans were extravagant. Green disclosed that up until March, things were running according to clockwork. The venue had been confirmed; the production team mobilised, major sponsors, including Jamaica National, had been locked in; and the cast was being finalised.

Bringing Back the Alumni

“Since it’s the 20th staging, we planned to bring back members of the alumni, including people like Blossom O’Meally Nelson and Juliet Holness. The Minister of Foreign Affairs, Kamina Johnson-Smith, was tapped to dance. There would also be new performers like the Roman Catholic archbishop in a DJ clash with Ian Wilkinson, QC. Janet Silvera, president of the Montego Bay Chamber of Commerce, was to have had a dance-off with Carole Francis of JNN. New faces included Susan Simes of ‘The Susan Show’, and there were plans for a special segment with Saint International, also celebrating its 20th year, with Dwight Peters gracing the stage,” Green outlined.

The Powerful Women and Men series is known for its rib-tickling moments and attracts A-list celebrities and politicians as both guests and performers. One of the secrets to the show’s success has been “the unlikely pairings of some of the island’s most respected professionals, performing acts that have patrons in awe”.

Over the past 19 years, Powerful Women and Men Perform for Charity has raised over $100 million to benefit the Mustard Seed Communities and assist with purchasing medication and food for over 500 children in the care of Mustard Seed.