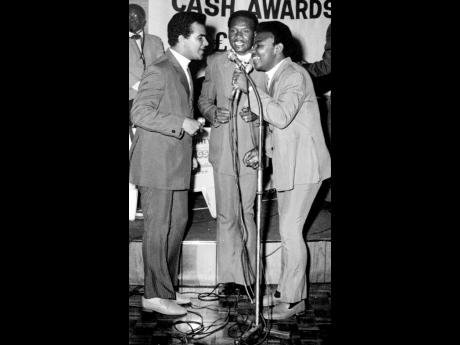 File
The Jamaicans (from left): Tommy Cowan, Martin Williams and Norris Weir doing their second-place song ‘Feel it Festival’ in 1969. They won in 1967 with ‘Baba Boom Time’.

In 1967, a group called The Jamaicans, which comprised Tommy Cowan, Norris Weir, Owen Hylton and Martin Williams, won the Festival Song Competition, with a song titled Baba Boom Time. The win secured for the group tours of the Caribbean, Canada and the United States and this placed them on a trajectory to international success.

Tommy Cowan, in an interview with The Gleaner, recalled those halcyon days. “When we won with Baba Boom Time, we were coming off two years of being victorious as winners of the Pop and Mento competitions and had a hit song titled Things You Say You Love ( You’re Gonna Lose). We won from the likes of Desmond Dekker and the Aces who had entered a song called Unity, and Al and the Vibrators with Move Up, who placed second and third, respectively,” he told The Gleaner. Written by Cowan and Weir, Baba Boom Time was produced by Duke Reid for the Treasure Isle label.

A huge feather in The Jamaicans’ cap, as winners of the Festival Song contest, they immediately became in demand. “We went on a major tour with Byron Lee and the Dragonaires, The Blues Busters and Keith Lyn. Some of the places we performed were Cayman, The Bahamas, Guyana, Trinidad, Barbados, Belize,” Cowan recounted. Recognising both the immediate and long-term value and reward of the competition, and also owing to their pride in nation building, The Jamaicans again entered in the years following their win, but they were beaten by the likes of Desmond Dekker, The Maytals and Hopeton Lewis. “These artistes all received international recognition from winning the contest,” Cowan noted, and although The Jamaicans didn’t secure another win, there is still some consolation. “Up to this day, we still receive royalties from Baba Boom Time,” he disclosed.

Cowan, the producer and organiser of Jamaica’s Fun in the Son, is happy that this year’s entrants, unlike previous years, is a healthy mix of established and new acts. Among the 10 finalists for the Jamaica Festival Song contest for 2020 are Buju Banton, Freddie McGregor, Toots and the Maytals, Papa Michigan, LUST, Nazzleman, Shuga, actress and television presenter Sakina, and up-and-coming dancehall artistes Xtra Bigg and Radix OD. “To have engaged and encouraged so many established and current artistes at one time is simply amazing,” Cowan said. “The early competitions saw the likes of The Maytals, Derrick Morgan, Desmond Dekker and the Aces, Hopeton Lewis and Bob and the Wailers entered one year but was unsuccessful.”

He set the record straight for those who have been saying that the competition was established to unearth new artistes. “The Festival Song competition’s original intent was to find that ‘song’ that would engage people of all walks of life to a oneness. The contest attracted entries from the best entertainers, but it also gave the opportunity for a lesser known artiste to find that song and create an upset, all in the spirit of the competition.” Cowan related how Eric Donaldson’s Cherry Oh Baby, a song that he produced, backed by the Inner Circle Band, featuring the likes of Ian and Roger Lewis, Ibo Cooper, Tyrone Downie (of the Wailers) and others created that upset. Another Festival Song produced by Cowan was Come Down by Toots and the Maytals.

For the past three years, Minister Grange has been leading the initiative to revitalise the Jamaica Festival Song Competition. She said the public will make the ultimate decision on who will be the Jamaica Festival Song winner. “The fact that we are in a period of COVID-19 when we are restricted in terms of having mass audiences and so on, we have decided to do the competition virtually – so the world is our stage on this occasion. And the winning song will be selected by the public, and so I just want to say that everybody can participate,” she said.

The Jamaica Cultural Development Commission, organisers of the competition, are currently finalising arrangements with telecommunications service providers on the mechanism that will enable the public to select the winning song. “When that song is selected about mid-July, there is enough time leading up to the Independence celebration for the song to be known, we want to hear that song on the lips of every man, woman and child,” asserted Minister Grange.

The winning song will receive a grand prize of three million dollars, to be shared among the producer, the writers, and the singer.