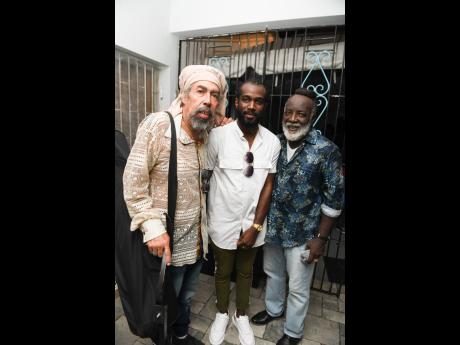 Big Ship Captain Freddie McGregor was in full celebration mode last Saturday evening at his virtual birthday concert which saw him sending out real-time shout-outs to all his “massive and crews” across the globe. “All my UK massive, this one is for you!” he shouted as he went into selections from his expansive Studio One catalogue. But, an artiste of McGregor’s calibre couldn’t be confined to one era. Instead, he traversed the decades, showcasing the Couchie, Taxi, Far East and Punaany ‘riddims’ in an hourlong performance which was divided in segments of half an hour and two 15-minute blocks.

He kept fans riveted with songs which included Love and Hate and Revolution, a tribute to reggae legend Dennis Emmanuel Brown; favourites such as Winner, So I’ll Wait For You, Big Ship, Loving Pauper, Push Come to Shove, Don’t Hurt my Feeling, To be Poor is a Crime, Africa (Here I Come), Bobby Babylon, Prophecy, along with brand new songs, If God is For Us and Bawling.

On his 64th birthday, the reggae icon was joined by friends who erased the generational divide and focused on displays of musical mastery. The evening was expertly guided by former member of veteran group, The Jamaicans, Tommy ‘Yes Indeed’ Cowan, who had the pleasure of not only introducing his own daughter Naomi, but also Freddie’s son Chino, Singing Sweet, Cat Coore, Dre Island and Chris Martin. They were backed by the hard-working, all-star Big Ship Band. Naomi gave a performance which was as sweet as the paradise plum she sings about; Big Ship sailors Chino and Singing Sweet made their captain immensely proud; Chris Martin, surprisingly, went back in time with a remake of the 1968 chart-topping single, Little Green Apples, which was also a hit for Dennis Brown; Dre Island stood tall and Stephen ‘Cat’ Coore was virtuosity at its finest.

On stage, Freddie revealed a little-known nickname for Cat Coore, the legendary reggae ambassador from Grammy-nominated band, Third World. After Cat and his ‘mello cello’ thrilled with an instrumental reggae version of Forever Young and a soulfully reverent display of Marley’s Redemption Song, he still had more to give. “Bring back my brother. We call him Tiger. He wants to play the lead guitar on one of my songs that he loves,” Freddie informed. With Dean Fraser on saxophone, as part of the band, and Cat joining on guitars, the virtual audience was treated to a classic, All in the Same Boat. The grand finale saw the friends back on stage for the cutting of the birthday cake and an impromptu all-Jamaican medley which included Carry Go Bring Come, If I Had the Wings of A Dove, A Little More Oil, and the closing number, Amen.

It was McGregor’s first ever livestream, and also the first time that Bandsintown, the world-leading hub for live streams, concerts and festivals, was actually streaming a reggae concert. Bandsintown, which “has expanded to become the premier destination where artistes and fans connect”, has 55 million registered concertgoers and 530K artistes.

“It was excellent. I enjoyed myself. I think we accomplished what we set out for. The main thing is, we got the stream right and California gave a thumbs up on that,” he told The Gleaner post-show.

McGregor noted that with lots of people from all over the globe tuning in to watch the US$12 per ticket concert, he was very concerned with representing well for Jamaica and reggae music, especially on that platform. “When you are going live, you need to have everything just right. And if we don’t present it right, then internationally, it won’t be wholesome. What we did tonight on this platform was groundbreaking in a sense. We made our mark all over again, and this is the type of excellence that Jamaica is known for. This is the first reggae stream for them and I am certain it won’t be the last,” the legendary reggae singer stated.

The Grammy-nominated singer was full of praise for his production team, the musicians and his ‘friends’ who passed through to support him on his birthday. One of his friends, his son Chino, told The Gleaner that he was excited to be a part of the concert. “It is a joy, especially given the fact that he is alive and fit and well and still active in music and able to record and perform alongside his offspring. So many are not able to enjoy that privilege. Give thanks and pray for extended life and extended health. Long live the Captain, 64 and 64 more!” Chino told The Gleaner.