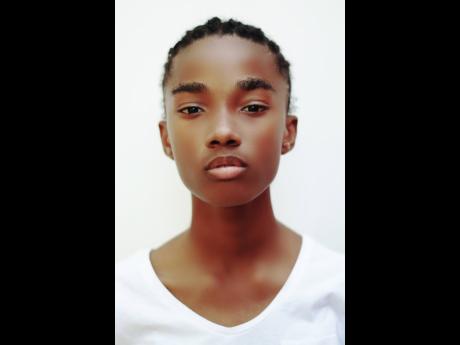 Shantae Leslie is a teenager raring to go, and not even a global pandemic will stop her from reaching for the stars. She immediately got the attention of several of the world’s leading agencies when her photos lit up social media after the highly popular ‘Stand out in a crowd’ episode of Pulse’s Caribbean Model Search (CMS) TV was aired on TVJ. Photographers captured the contestants during rush hour in the heart of Kingston’s busiest city centre, Half-Way Tree. The photo shoot had the rapt attention of the commuters as it did on social media. As the videos went viral, Leslie caused an uproar with several agencies in the market vying to represent her in London, Paris, New York and Milan.

The 16-year old beat 15 other contestants to take the top prize in the most recent series of Pulse’s Caribbean Model Search TV show. With the region’s most coveted modelling title under her belt, Leslie is now signed to one of the biggest and best international agencies, IMG Models.

Surprised by her victory, the quietly confident Leslie says she is determined to go places which to date has only been in her dreams. She knows this will require patience as COVID-19 persists in several regions across the globe. But, that reality has not deterred the high expectations she has for making a name in fashion. “I want to be the next big Pulse star,” says the soft-spoken teenager. “Things have been pushed back a bit because of coronavirus, but I am patient, I believe my time will come very soon,” she beams.

Discovered in Pulse’s Schools Model Search at age 15, Leslie has been focused on completing her CXC courses at Clarendon College. And, the challenges of being in her final year during a pandemic is not lost on her. Despite the times, she counts herself lucky and has a great sense of perspective which belies her age. “It’s sad that I won’t have a normal graduation from high school, but I think I will do well with my exams and, thankfully, I have a career to look forward to, even though the coronavirus is still around. I have always wanted to be a model since I was a little girl. I played dress-up with my aunt’s clothes, and I love fashion. I was so happy the day Romae [Gordon] came to my school and picked me.”

Leslie’s sunny disposition is remarkable, given the tough times she has already experienced in her young life. In a dramatic moment during the CMS TV show, she revealed that her father was killed when she was at the tender age of nine. “It is hard not having him around. I really miss him, but my mother has been my everything, and I want to make her and my dad proud of me. I want to be a big success.”

Lisa Di Ruocco of IMG New York revealed, “We love her. She has a great personality and we can’t wait to start working with her.” Luis Domingo of IMG London added, “Shantae is beautiful!”

At five feet 10 inches tall, the CMS TV show winner has the potential to do well in all areas of modelling. When she steps on to the world scene, the artistic Leslie, who loves to do illustrations and other forms of drawing, will join a list of stars from Pulse who has been represented by IMG, including Carla Campbell, Gaye McDonald and Jaunel McKenzie. IMG is home to Pulse superstar Jeneil Williams.

Leslie is expected to head to London in the fall to begin her international career.“I was shy at the start of the CMS TV show and so I am very glad for that experience, now that I have grown in confidence, I want to get in front of the cameras overseas,” says Leslie.