Janet was precious, Ernie Smith says of late wife - Laughs through the pain 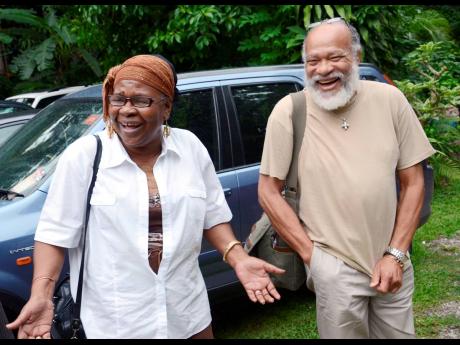 File
Janet Smith has some fun with the photographer as she arrives with hubby Ernie for his performance at Pon Di River. 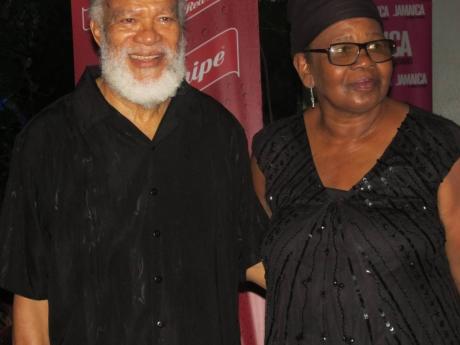 Ernie and Janet Smith have been an inseparable duo for decades and although they never performed together on a commercial stage, there was really no need for that, as their entire life was the ultimate stage. When Janet passed away on July 1, it closed the curtain on a chapter that started when the two met while attending York Castle High School in Brown’s Town, St Ann.

“When I told a friend of mine that we met in high school and were even in the same class, he said, ‘And she still married yuh?’” the legendary reggae singer shared with The Gleaner. “Janet was sick for over a year. We went to KPH, UWI, Nuttall, St Ann’s Bay hospitals. But now she’s gone home. The loss is mine.”

Since Janet’s passing on July 1, Ernie Smith’s phone hasn’t stopped ringing. Persons from within and outside of the music fraternity have been calling to offer their condolences and to remind Ernie to take care of himself. He insists that he has been taking his medication, because “Janet wouldn’t have it any other way.” Among those reaching out was Capleton’s manager, Claudette Kemp, who shared her message. “On behalf of Capleton and the rest of the A St Mary Mi Come From team, I extend sincere condolence to Bro Ernie and the entire family on the passing of a beautiful soul.”

Ernie disclosed that the incomparable Janet Smith left strict instructions on how she wants her thanksgiving service to play out. “Her son has it on video. No long service, no long speech, and no nine-night. Plus she left instructions to be cremated, and wants her ashes to be spread in the sea,” Ernie outlined. And woe unto them if ‘Miss Janet’s’ wishes are not carried out to the letter. “She seh she going to come back and shake tree. She is certainly something else,” Ernie laughed through his obvious pain.

He spoke about how Janet “always had [his] back”, and emphasised how “precious” she was and an absolute joy to be with, no matter what.

Ernie and Janet Smith got married in 1994. “But we were living together before that,” Ernie shared, but couldn’t remember for exactly how long. But that was perhaps due to something sounding like tears about to creep in. “When me feel like cry, me go hide,” Ernie said. Then he related an anecdote.

“I told somebody that the other day and her response was priceless. ‘Cry anywhere yuh want! After yuh nuh ugly!’” Ernie said. So, now, he’s crying anywhere he wants.

No date has been set for the service, but it will be carried via Zoom.

Ernie Smith has had a slew of hits dating from the late 1960s, among them Bend Down, Ride On Sammy, One Dream, Duppy Gunman, and Pitta Patta. In 1972, he won the Yamaha Music Festival in Japan with Life Is Just For Living, a song originally written for a Red Stripe commercial. The beer company’s 2016 Christmas campaign reimagined the iconic 1972 song and commercial, this time around with Ernie Smith in collaboration with Wayne Marshall and Mystic Davis.