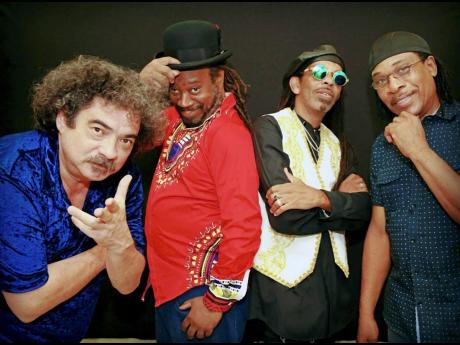 Sometime in 2015, a collective of seasoned musicians pooled their immense talents to form the ATF Band, with the stated purpose of breathing new life into the local and international scene, after citing “a void of authenticity and true love and respect for the music”. Five years later, they are excitedly dropping their very first EP.

ATF, which, believe it or not, means After the Fact, comprises Herbie Harris (founder) on keys and vocals; Stephen ‘Leeven’ Lee on drums and vocals; Courtland ‘Gizmo’ White on guitar and vocals; and Lyndon ‘Ace’ Webb on bass and vocals. “We released the title track, Yardie, last year, and it is doing well,” Lee shared. “The Jamaican diaspora in the USA and the UK received it well, and Yardie even made it to the top spot on the reggae charts of The Foundation Radio Media Network.”

The seven-track EP, which will have its official launch online this afternoon, marks a new beginning of sorts for these experienced, road-much-travelled musicians, who, Lee acknowledges, may be “up in age a little”. But Lee, who in the early days did a lot of work for artistes like Yellowman, U-Roy, Lt Stitchie, Gregory Isaacs and Chakademus, emphasises that music, and the love thereof, have no age limit. “We’ve been around a long time, we love the music, and we have all been friends over the years. ATF got its start by playing at a friend’s restaurant every Friday. We would play songs that were hits in the ‘70s, ‘80s and ‘90s. And since we were playing them after they were hits (after the fact), we came up with the name ATF for our band,” Lee, who formed the band Kotch in the ‘80s, along with his uncle, Pablo Stewart, said with a laugh.

They subsequently made the decision to focus full-time on developing their own unit and soon after started writing original material. Despite the ongoing coronavirus pandemic, ATF has forged ahead with their plans. “We have no idea how long this thing [COVID-19] will last. What we going to do, sit down and do nothing? No! We have to do what we do best and that’s music. We have also been using this time to rehearse and even started a little series on YouTube, ‘ATF Live in the Rehearsal Room’, which has a very nice vibe,” Lee explained. Yardie will be distributed by VPAL Music and is also available on all digital platforms.

Lee, who enjoyed success with Kotch with the 1986 hits Jean and Head Over Heels, returned to Miami in the late ‘90s, and did work with various artistes out of Sonic Sounds. When ex-Kotch member, Harris, told him that an opening existed for a drummer in ATF, he seized the opportunity.

According to his biography on the band’s website, Herbie Harris’s musical career started in the early ‘70s, playing with the 7th Extension band. He joined Kotch as their keyboard player in the early ‘90s and also did work with Sly & Robbie, playing on the hit song, Murder She Wrote. He toured the world backing Maxi Priest and Freddie McGregor and early in 2000, joined Third World Band as keyboardist. After a decade, Harris took a break from touring to spend more time in the studio. In 2015, he founded the ATF Band.

White began his musical career playing bass guitar, but later switched to lead guitar. He toured with legendary artistes such as Ini Kamoze, Black Uhuru, The Abyssinians, The 7th Extension Band, and was the lead guitarist for Raging Fyah.

Webb played for some of Jamaica’s early dancehall artistes such as Sean Paul and Tiger before taking off for further education at the School of Audio Engineering (London). On returning to Jamaica, he joined the band GiBby, recognised as the leading influence for the alternative scene on the island. He played bass for successful California reggae band, Big Mountain, until asked to assist Leon and The Peoples (New York), with engineering and arrangements.

Since its inception in 2015, ATF Band has been performing at clubs, venues, and private functions doing a mix of reggae, dancehall, ska, rocksteady, and R&B.